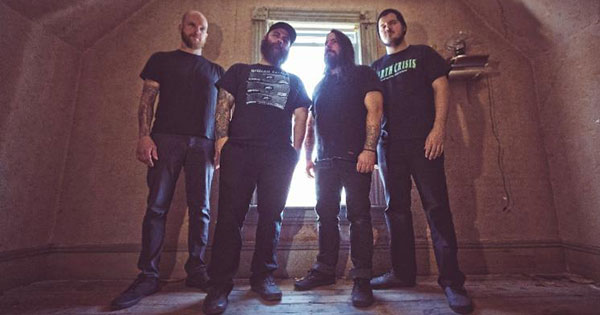 Official press release: Century Media Records is excited to announce the signing of Fort Lauderdale natives Ether. Born from the ashes of vocalist/guitarist Peter Kowlasky's (vocals and guitar) former (and occasionally still active) band, Remembering Never, Ether marry the dissonant sounds of Neurosis and Swans, the sumptuous gloom of Type O Negative and the riffing of their home state's death metal heritage. Helmed by a creative core of Kowalsky and Devin Estep (vocals, guitar), Ether have spent the past three years touring clubs and DIY venues across the Eastern seaboard and Canada, performing alongside the likes of The Body, Eyehategod, Cro-Mags and Torche. Ether was brought to the label's attention by longtime A&R vet, Michael Alago, whose credits include signing Metallica and White Zombie and whose career was recently profiled in the documentary film, Who The Fuck Is That Guy? "Ether are both brutal and majestic in the presentation of their music," says Alago. "There is also a beauty that is totally arresting in all its heaviness." While Ether is presently writing a new album slated for release in 2019 via Century Media, the label will be re-releasing the band's previous full-length LP, There Is Nothing Left For Me Here, which is slated for an early 2019 release. The album, initially self-released by the band on Dead Truth Recordings, has been remastered by Brad Boatright at Audiosiege Studios in Portland, OR. "There's a rare sort of musical and emotional depth to Ether that you don't often come across - particularly in music this heavy," says Century Media/Red Music VP of A&R, Mike Gitter. "You literally discover something about them with every listen." "We have pushed our band about as far as we can on our own and Century Media is a legacy label that has released some monumental records over the last few decades, many of which helped shape our music," states Kowalsky about the band's signing to Century Media. With a new album largely written and extensive U.S and European touring planned for the coming months, Ether is prepared to make a striking sonic statement.