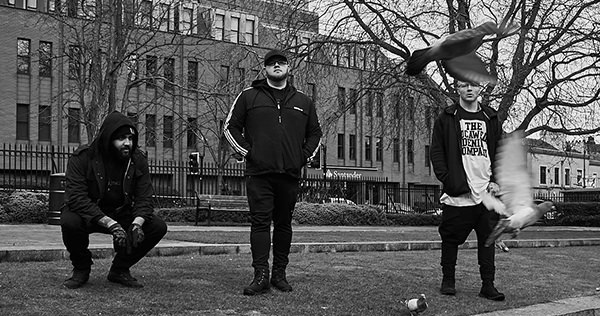 Official press release: King 810 have emerged from a brief period of hibernation fully revitalized and ready to release their gripping third album. Suicide King arrives on January 25, 2019. The band is self-releasing the album. Suicide King is available for pre-order via exclusive merch bundles that include limited edition black smoke vinyl — all sold exclusively through the band's Big Cartel store. Additionally, the Flint, Michigan-based group has shared the brand new song "Heartbeats." The track marks the first taste of much-awaited new music from the band since the 2017-issued Queen EP. "This is what your favorite band's favorite band sounds like," said frontman David Gunn about the track. Suicide King was produced by David Gunn and Josh Schroeder in the band's native Michigan. Full U.S. tour plans for 2019 are in the works. Suicide King track listing: 01. Heartbeats 02. Braveheart 03. Bang Guns 04. A Million Dollars 05. .45 06. What's Gotten Into Me 07. Black Rifle 08. God Is Watching 09. Wade In The Water 10. Sing Me To Sleep

David Gunn a.k.a. the Bando Commando slash Rambo a.k.a. the Pyrex Pirate here. I walk through the graveyard like the police walk through prisons, but that's just the kind of life you have to live in Flint, MI, which is CRAZY. Not sure if you know this or not, but that's where KING is from, and it's CRAZY. Gonna do some 1-finger pushups while reciting Camus, then it's time to prowl the streets to catch a body.

Meanwhile, Code Orange and Turnstile are still signed to Roadrunner.

These guys seriously scare the living shit out me

David Gunn could %100 kick my ass, but he's still sucking his own dck with that comment.

Those pigeons are probably flying away because they're scared of David Gunn.

This code orange shit is tight.

i wonder if these guys are from Flint, MI at all.

Is this a Stuck Mojo comeback or what fellas??

Self released record? Did they get kicked off of Roadrunner already?

It's hilarious David Gunn feels like he has to retort the shit talkers on here. Bruh your band sucks in every facet.

Can these jerks drink the water and choke on it.

This band fcking sucks. They need to act tough to make up for their lack of EVERYTHING!!!

Haha dude has lost his damn mind. If you want a bigger laugh Check out his fcking solo shit.

This band just gets worse

06. What's Gotten Into Me This track has to be about penis. Am I right fellas?

"King 810 have emerged from a brief period"

the bass strings are as loose as my jerk is after it was knocked loose while trying to catch a few bodies in flint mi. This is on AILD tier.

This band is the equivalent of Red Hot Chili Peppers. Repeatedly reminding us where they're from.

I watched Flint Town. If that lady cop can make it then it aint that tough. King 810 is the lady cop of Flint.