Details emerge in death of All That Remains guitarist 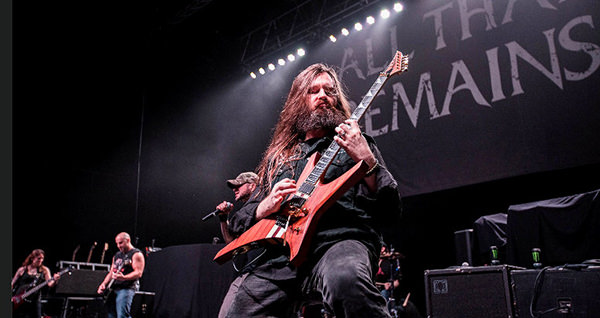 Craig Bryon Photography
Earlier today, the metal world was stunned by the sudden passing of All That Remains guitarist and founding member Oli Herbert. While the band confirmed the untimely death of the 44 year-old, they did not disclose any further information. Now, TMZ has issued some initial details regarding Herbert's passing:
Oli was found dead in a pond near his Connecticut home ... law enforcement sources tell TMZ. We're told police were dispatched to Oli's Stafford Springs home Tuesday afternoon after someone reported him missing. Cops searched the area and found Oli in a nearby pond. Police sources say the death does not appear to be suspicious, but an autopsy needs to be performed to confirm the cause and manner of death. The Connecticut medical examiner is investigating.
Meanwhile, Herbert's publicist issued this statement:
"On behalf of Oli's wife and family I can confirm that Oli Herbert passed away yesterday unexpectedly as a result of an accident which occurred on the property of his home. He was 44 years old. No further details are being released at this time. Funeral arrangements are pending and will be announced once that information is available. The family requests for privacy during this time but does wish to express their appreciation to fans worldwide for the outpouring of condolences."
Herbert's wife, Beth, also released her own statement:
"Hello everyone this is Beth, Oli's widow. Thank you all for the kind thoughts and words. I don't want to go into what happened until we have a complete picture, but as soon as we do there will be a statement from the family on this page. In the meantime, please respect our privacy as there are still relatives being informed of Oli's passing. Thank you."

Tags: All That RemainsOli Herbert