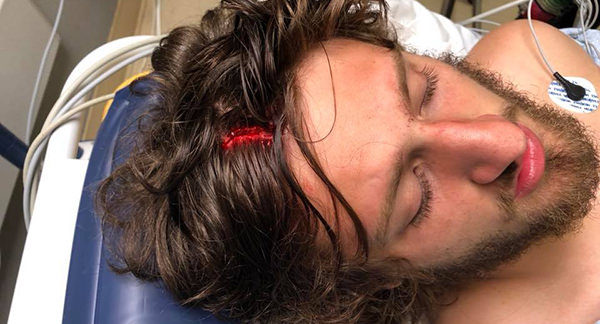 photo via Jeffrey Esgro Facebook
New Jersey hardcore band Tourniquet (aka TRNQT) has been accused of seriously injuring a fan during their performance in Wilkes-Barre, PA on Monday night, September 24. Attendee Jeffrey Esgro says Tourniquet intentionally hurt him during their set, which took place at a Knocked Loose show. According to Esgro, the band "decided to look directly at me and spike the corner of their guitar case directly at the top of my head I could have been put into a coma or even killed on impact doctors said it was harder than the impact of a full swing from a wooden bat then they proceeded to throw their mic stands and guitars at the crowd." "When they realized they injured someone they immediately started to pack their gear and bring it to their van," added Esgro. You can read his full statement and check out some photos here. Despite an outpouring of Facebook venom, Tourniquet has yet to address the matter. UPDATE #1: There are some out there who report that Esgro frequently partakes in crowd killing and suggest that he has little room to complain about being injured at a hardcore show. You can decide upon that for yourselves. UPDATE #2: A helpful person took some alleged video of the incident, slowing it down and brightening the footage. The video isn't great quality, but you can clearly see a guitar case being thrown into the pit and hitting someone in the head. Check it out: