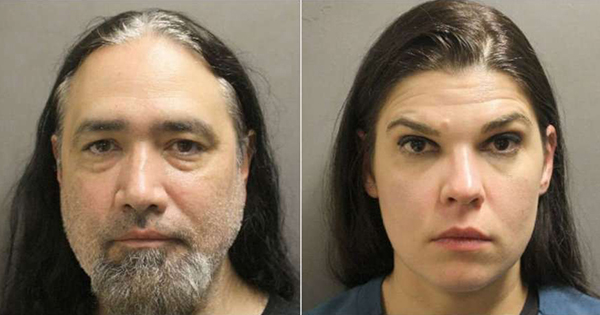 photo via Harris County Precinct 4 Constable's Office
A Texas couple has been arrested for allegedly leaving their 11-year-old daughter home alone while they traveled hundreds of miles to see influential English industrial metal act Godflesh perform. The news comes via the Harris County Precinct 4 Constable's Office and the Houston Chronicle. According to court documents, the girl's parents, John Guerrero, 48, and Virginia Yearnd, 39, left their home on Wednesday, August 22 to attend a Godflesh concert that night in Detroit, MI. The pair was arrested in Houston on Monday night. Authorities were alerted to the situation by the girl's great aunt, who had called the child and was informed that she has been home alone since the previous morning. After attempting to contact her parents, deputies visited the home and found the girl "trying to cook." The couple claims that Yearnd's sister had been tasked with checking on the girl, but failed to do so. The parents were arrested on charges of second-degree felony child endangerment and subsequently booked in the Harris County Jail with no bond. They face up to 20 years in prison if convicted.