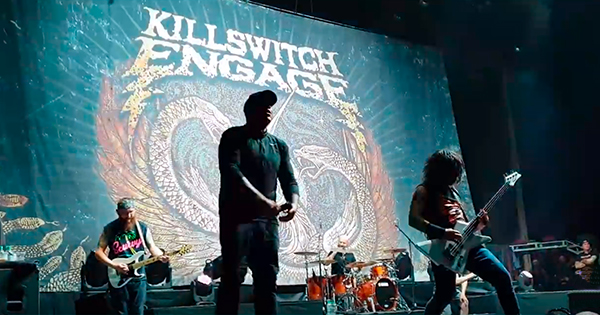 Former Killswitch Engage vocalist Howard Jones joined the band on-stage last night, August 10th, in London, England for a performance of "The End Of Heartache," a track Jones co-wrote and originally sang. Footage of his appearance can be found below. Jones, currently of Light The Torch, will apparently join the band for another performance of the song tonight, August 11, as well. Current Killswitch Engage frontman Jesse Leach commented: "Nothing but respect for my dude Howard. It was rad to share the stage with him tonight and hear him belt out 'End Of Heartache'! What a voice! (Update: I convinced him to come back tomorrow and do it AGAIN!) If you haven't already you need to check out his killer band Light the Torch, huge sing along and heavy riffs with those soaring melodies from my man Howard! Really happy to finally become good friends and keep in touch with him after all of these years."