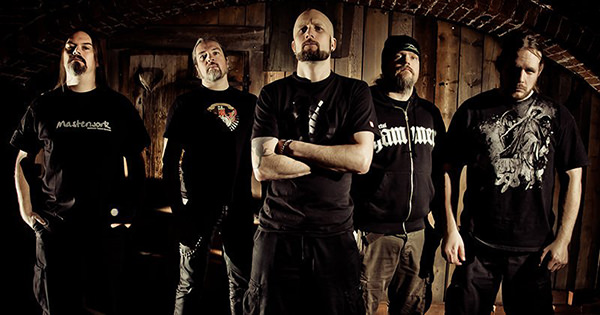 If you consult Wikipedia for the meaning of "djent," you will be told that it's "a sub-genre of progressive metal, named for an onomatopoeia for the distinctive high-gain, distorted, palm-muted, low-pitch guitar sound first employed by Meshuggah." In a recent interview with Rauta (video below), Meshuggah guitar player Marten Hagstrom apologized for creating the genre: "First of all, we're very sorry for creating that genre; we didn't intend to — our bad. No, but it's actually… I think it's a misconception, that djent thing. I think it's kind of hilarious. It's our lead guitar player, Fredrik [Thordendal], being drunk back in the day, talking to one of our old-school fans, trying to explain what type of guitar tone we were always trying to get, and he was desperately trying to say, 'We want that 'dj_,' 'dj_,' 'dj_,' 'dj_.' And that guy was, like, 'What's he saying? Is that a Swedish word? Must be. Sounds like dj_, maybe 'djent'? Maybe something like that.' And that's where it comes from. A drunk misunderstanding, as always with Meshuggah." When asked how he would describe Meshuggah's style, Mårten said: "Heavy, experimental music… I don't care if it's progressive or not — it's heavy. And that's the most… But the thing is, trying to define things… Either it gets into that math-metal, djent subgenre type of thing, that's for other people to decide. We play aggressive, experimental music, and that's basically it." [via Blabbermouth]