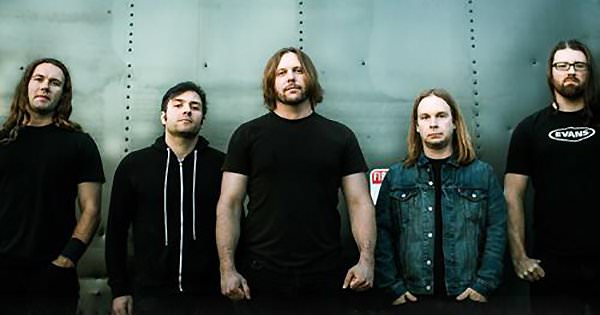 Unearth has unveiled the first single from their forthcoming studio album, the Massachusetts metalcore band's first since 2014. New song "Incinerate" can be streamed below. The track will appear on the album, titled Extinction(s), which was produced by Will Putney and will hit streets this fall via Century Media Records. Vocalist Trevor Phipps comments on the song: "'Incinerate' brings the raw aggression and heaviness of our early material while also showcasing elements of where we've gone as a band since. Lyrically, it is meant to be a song of unity in a time of great polarization around the world. We are constantly being told to not like our neighbor because they might have different views. The theme is a faith in humanity to come together and combat and rid the world of those that are intentionally dividing us."

I thought they were on Metal Blade?

sounds like the acacia strain since DL assisted unearth in writing the record, hah.

Trevor's vocals are awful in this. He had a good, fairly-unique sounds before, don't know why he is going this generic route.

Disappointed in the lack of Ken Susi comments.

anonymous53 minutes ago I thought they were on Metal Blade? I work at MB and we picked up Unearth when we foresaw that metalcore wave coming in the early 2000s along with AILD who of course went on to become the definitive metalcore act of an entire generation. We signed all these bands to 5-album deals and Unearth gave us their 5. So now, they can get the fck out of this auditorium along with CNN.

Wow!!.. Did not expect there to be a big breakdown at the End of the song!

Unearth still sound identical from when they first came out. I guess you know what you're getting with them but damn, grow a little!

as i lay dying sounds way different as unearth

^^ Never heard Unearth when they first came out. Unearth became generic metalcore after Above the Fall of Man and The Stings of Conscience. They haven't done anything since then that has stood out.

The Endless EP wasn't too bad either.

Watchers Of Rule was UNREAL. Certainly disappointed by this.

band hasnt been good since the oncoming storm

Not bad but sounds pretty boring. I was expecting a little more than this. I don't want them to write another In the eyes of fire but that album was heavy with many riffs and this one just sounds like they are not even trying.

Sounds like a massive Poison the Well rip off. No metal at all.

Unearth is better when they play Metal! Bring back Terry Date as your producer!

Will Putney is like the guy that played in Eso Charis right?

This sounds like Unearth to me. They were on a trajectory headed straight to sounding like another AILD, then watchers of rule came out and was just a blistering technical mess, now this sounds like they're back to playing comfortable slamdance metalcore

Hi... Tim Lambesis here... Time Lambesis from As I Lay Dying... I dont want to Unearth the obvious... but the we (AILD as band) have only released one track, and I can already tell its going to be way better than your whole album. You should ask me, Tim Lambesis, to produce your next album next year... I might even throw in a free hitman as well. Kisses xx

They were on a trajectory to sound good and they gave up cuz it was too hard. AILD will surpass them later this year that's for sure. At least Unearth thy will get invited to be direct support as a olive branch.

I work at Best Buy, we didn't c-m in your mouth, it was on your face.

Saw these guys in NJ when they first fell from grace. They drove in a van to Mainstage. After the show they were so cool. They all took turns in my ass and everyone came in my mouth

that snare drum needs to be tuned up some, it sounds like somebody kicking a cardboard box with their sneaker.

Ken Susi has the sex with all the womens. #ladiesman

^no. Botch is gay and you are gay.