Wed, June 27, 2018 9:14 AM PT5,346 views
Thomas Gabriel Fischer, frontman and founder of Swiss metal band Triptykon, has revealed that his arm was recently broken during a violent and unprovoked attack. Though he will be unable to play guitar for the next two months, Triptykon will not cancel any shows. Fischer shared the following information:
"Once my right arm, shattered in an unprovoked, ultra-violent, and drug-fuelled attack, has healed sufficiently, I will again be able to tend to the rapidly accumulating mails in a far more timely manner. According to the doctors who are tending to me, this should occur sometime in August. As my arm is entombed in a full-length cast right now, I am rather clumsy with my utterly unprepared left hand, and writing (and everything else) is a quite challenging proposition at the moment. The hospital staff felt sufficient pity to at least provide me with a suitably black cover for the cast. "And for those inevitably curious, yes, I was ultimately able to regain the initiative and defend myself, with a broken arm and in spite of being disadvantaged due to the element of surprise and the ferocity of the attack. True to his obvious disposition as a coward, the attacker swiftly took flight when he realized I was subsequently going for his life. I had certainly pictured my return home from the extraordinary 20th anniversary celebrations of the Museum HR Giger to take an entirely different course. Alas, this is the real world, and these are the realities of life. "I detest violence, and I equally detest the effects of alcohol and drugs which solely serve to amplify the grave shortcomings of us members of the human race. "We will not cancel any Triptykon concerts, of course, but I will only be able to sing at the moment, returning to the guitar as the speed of my recovery will permit." 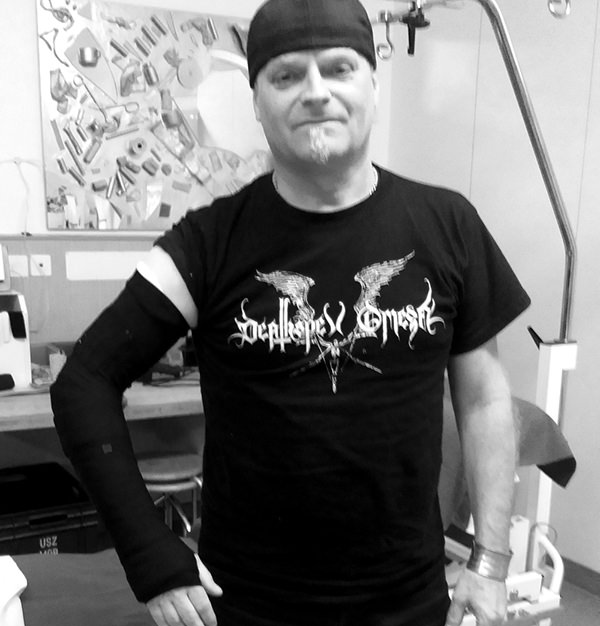