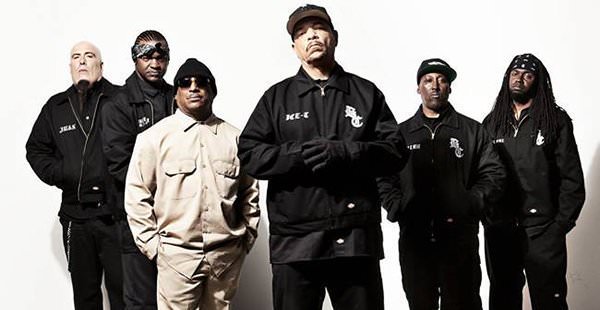 Los Angeles, California crossover thrash veterans Body Count released only four albums between 1992 and 2006, however, their third record since 2014 is now in the works and will arrive in 2019. Speaking with Loudwire on Friday (May 18), frontman Ice-T stated that Body Count already has the title Carnivore chosen for the album. "It's basically: 'Fuck vegans.' We figure, anything carnivorous pretty much kicks ass. We're carnivorous! I'm not saying 'Fuck vegans,'" Ice-T said. "Everyone's so pussy right now... we're carnivores." Ice-T expects tracking to commence in September, saying, "We haven't written a lyric! We start out albums with a name; that's how we started 'Bloodlust'. We're probably going to start recording tracks in September." Interestingly, Ice-T also told Loudwire that the new album will almost certainly feature current Six Feet Under (and former Cannibal Corpse) vocalist, Chris Barnes. Ice-T explained, "Chris Barnes told me he would kill me if he doesn't get on this next album. because I worked with Six Feet Under. People like Chris Barnes, I don't want to get him mad, because I know he might dissect me or some shit, so we're gonna get some death metal on there from original Cannibal Corpse." Body Count is also open to input from other musicians of repute. "For any fans of Body Count, if you think you have something that we can fuck with, I can take an idea and turn it into something," says Ice-T. "On 'All Love is Lost,' Max [Cavalera] gave us the first idea and a song came out of that. We're not afraid of having fun with other bands."

TJ Cinnamons here to let all the haters know that Ice Cube has feelings too so please keep your criticisms to yourselves THANKS!

Wait - so he's saying vegans John Joseph and Harley Flanagan Cro-Mags are pussies. It's safe to say either could turn him into a pretzel. Hey let's name our next album after a widely known crossover band from NYC fronted by a very famous late singer - fckin' idiots. Who died and made this guy a hardcore punk person?

Dude, Ice has been in punk since like the 80's Cop killer is still a banger

Dude, Ice has been in punk since like the 80's Cop killer is still a banger No he hasn't. He never played in bands, went to shows, hung out with punks etc. He's a rapper who somehow someway found hardcore punk in 1989-90 at age 31-32 after he became rich and famous from his rap career blowing up, that's it.

^^^ To continue, Body Count's initial existence was based on that it was world famous rapper Ice T's "punk" band. That was the talk/buzz around them. So spare me the revisionist history. He co-opted a music and community he was never part of.

Oh yeah - he's so "punk" he removed Cop Killer from the band's debut album because of the heat/shit the band caught for it. Way to stand by your words, pssy (since he likes to call vegans that.)

Also he and countless other bands never, EVER mentioned the word "hardcore" back before it was cool to mention again by the mall punk crowd. Go up to your typical Lollapaloozer in '92 and talk hardcore and he was either a hater who ditched hardcore by 1988/89/90/91 or clueless.

Ice-T upset a lot of vegans here, calm down.

Hey haters TJ Cinnamons here again to say I thought I told you to go easy on Ice Cube here, he has a mom too who loves him and cares about how people talk about him. Maybe just lay off a bit and have a great Monday okay!

CHAKA MALIK HERE. I fckED A LOT OF VEGAN CHICKS. ICE HIT ME UP, I'LL MAKE MUSIC WIT YOU. YOU SEE THE NEW BURN RECORD, THAT SHIT IS STRAIGHT MONEY. LET N*GGA EAT WIT YOU. I MAKE HITS. THE OG NYHC BLACK MAN.

Is that Scott Ian lurkin' back left?

he should get tim lambesis on this.

You right, I don't know shit I was just guessing about the history of this c-m thumper

i hate this band because they suck but i LOVE the slogan, would pay $10.00 to their show and support them for that comment.