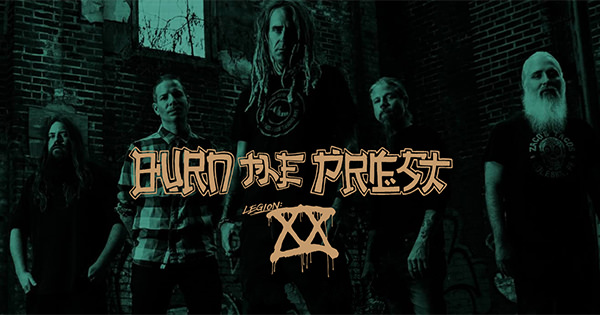 Earlier this week Lamb Of God began teasing an announcement related to their original incarnation, Burn The Priest. After several days of speculation, Lamb Of God frontman Randy Blythe set the record straight tonight (March 22nd) during an episode of his Gimmie Radio show. This spring, Burn The Priest will release Legion: XX, a covers album honoring some of the band's influences. The release was produced by Josh WIlbur (Lamb Of God, Gojira) and will arrive on May 18 through Epic Records. For now, the band's cover of The Accused strack "Inherit The Earth" can be streamed below via YouTube and the album is available for pre-order via Amazon. The track listing for Legion: XX is as follows: 01. Inherit The Earth (The Accused) 02. Honey Bucket (Melvins) 03. Kerosene (Big Black) 04. Kill Yourself (S.O.D.) 05. I Against I (Bad Brains) 06. Axis Rot (Sliang Laos) 07. Jesus Built My Hotrod (Ministry) 08. One Voice (Agnostic Front) 09. Dine Alone (Quicksand) 10. We Gotta Know (Cro-Mags) Here is the new Travis Shinn-directed video for their "Inherit the Earth" cover: