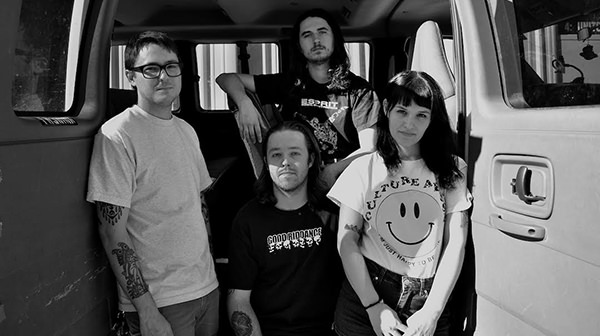 Official press release: Ft. Lauderdale's Gouge Away will join the ranks of Deathwish Inc.'s diverse and progressive artist roster. The Floridian quartet stormed their way into existence in 2013, playing outspoken hardcore that has mutated into an angular blend of sass and spite. Their songs opt for enraged critiques on social ills, pummeling through all time and space in their wake. Taking cues from bands such as Unwound, The Jesus Lizard, and Fugazi, Gouge Away will pull no punches for their forthcoming Deathwish debut. The backstory on how Gouge Away came to be on Deathwish Inc. is not an uncommon one (getting signed after being vouched for by artists from the roster), but one that'll make you root for them as if they were your home team. Vocalist Christina Michelle met Touche Amore vocalist Jeremy Bolm in 2012 and developed a friendship that started before Gouge Away took form. Soon after, Gouge Away released their praised debut LP, Dies, and Bolm reached out to take the band on tour with Touche Amore and Ceremony. "You know that feeling you get when you see something you know is important? Whether its a film, a photo, a painting, or a performance… that's the feeling you're left with after this band engages you," said Bolm. Excited and enthralled by the incredible dynamic that Gouge Away brought and the strong friendship that formed, Bolm then released their follow up EP Swallow b/w Sweat on his imprint record label Secret Voice. In 2017, Gouge Away once again supported Touche Amore on a second full U.S. tour where Deathwish Inc. co-founder Tre McCarthy attended the Philadelphia date and was witness to the band's mesmerizing set. Now that it's time to do a follow up LP, it only makes sense for them to move up and release their much anticipated follow-up on Deathwish Inc. Gouge Away has studio time booked with Jack Shirley at the Atomic Garden (Deafheaven, Oathbreaker, Jeff Rosenstock) this April and the resulting album will be co-produced by Bolm himself. With years of touring and studio experience under their collective belt, Gouge Away will fully expand on their sound on their sophomore LP. Christina comes with a deeper introspection on struggles with mental health, not holding back with this incredibly personal outpouring as lines like "paranoia comes knocking, she's my only friend" repeat and repeat. Guitarist Mick Ford brings a dissonance to their sound that separates the listener from what could be expected, and the rhythm section made up of Tyler Forsythe and Tommy Cantwell (who also perform together in the band Axis) will aggressively keep the songs in place. Gouge Away carry with them a lightning-in-a-bottle urgency that imbues their sound; this is a band that refuses to be ignored - let alone forgotten. Look for updates to surface soon.