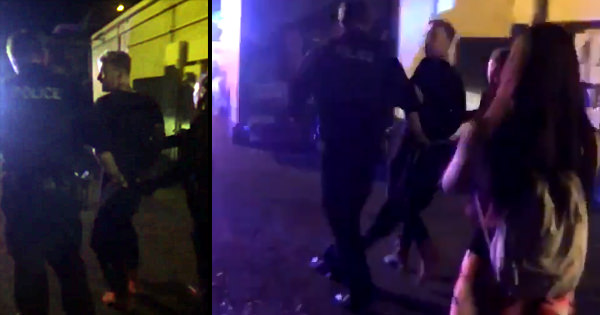 Last night (March 12) Slaves were in Scottsdale, Arizona to perform at Pub Rock Live as part of their current tour with Ghost Town and Dayshell. Unfortunately, it appears that all did not end well as musicians and fans were ejected from the venue during Slaves' set for undisclosed reasons. It's not clear what transpired next, but we're told that Slaves frontman Jonny Craig then proceeded to damage some of the venue's equipment. Craig was ultimately led away from the venue in handcuffs and seemingly arrested by Scottsdale police. Since this happened just hours ago, all we have are the videos below. UPDATE: Craig was indeed arrested on charges of criminal damage and disorderly conduct. He is currently in custody and awaiting arraignment. UPDATE #2: According to Slaves, the charges against Jonny Craig were dismissed earlier today and he was subsequently released. Here's what they had to say:
"About last night....... "To confirm the rumors, Jonny Craig was arrested last night in Scottsdale, AZ. "As Slaves were performing on stage, an altercation was transpiring backstage between members of the band Ghost Town causing the venue to call the authorities. While police arrived, the bands set was hastily shut down 30 minutes early by cutting off all microphones on stage. "Unaware of what was happening (along with the fans), Jonny 'dropped the mic' and damaged a few microphones (approximately $60 dollars worth of damages, which were paid for by the band). In response, the police handcuffed and arrested Jonny for criminal damage. This was obviously an excessive use of force (realized later), resulting in all charges to be dropped and Jonny to be immediately released. "We want to thank all fans, old and new for their support on the release of our new album and coming out to this tour."

Yo went to the @SLAVESOFFICIAL concert last night. Shit was lit up until @jonnycraig4L was fucking arrested! The venue @PubRockLive cut everyone's setlist short and the wouldn't let slaves perform the only encore song. Here's what went down. #FreeJonnyCraig ?????? pic.twitter.com/a84LHo046A

@jonnycraig4L was arrested tonight at his own show and he asked us to film it ?? free Jonny, and fuck Pub Rock!!! pic.twitter.com/NUbuTwOq3L

Arrested for child molestation along with the Seven Sisters of Sodomy.

they arrested him for having some lumps in his diapey

an encore? who are you pearl jam? bands in this genre and scene don't need an encore. Your band isn't that big.

So you didn't get to play your encore song and you got arrested for it. Great job, that'll look good on the background check when you're applying for that shift lead position at Zumiez in a couple years. Also of course every person in the video filming the arrest is a girl between the ages of 16-29.

Arrested for heroin possession most likely, I'm calling it now.

Just lock him up forever. Isn't there a scene jail somewhere at the pitchfork office?

no I was there last night we all want to just one more song The Venue didn't approve it they turned off the mics and speakers so we couldn't play anything so Johnny he picked up the microphones disconnected and threw them on the floor smash them completely broken that's when the cops came that's what they came for for damaging the microphones welcome to earth.

Nothing exemplifies the brain "quality" of Jonny Craig fans like the explanation offered above.

Him getting arrested reminds me of how Mclovin looked when he got arrested in Superbad.

Someone finally lock this dude up and throw away the keys. The crime? Being the most annoying fcking tool in all of music.

Why do people still give a shit about this jerk?

Nothing says "get the popcorn ready" like a Jonny Craig article.

17 comments in and no one has said or asked if Jonny Craig is related to Jenny Craig? Y'all're slippin'!

Dumb girls yelling "bullshit" - I'd like to see someone come into your house and break your glass table. Would that also qualify as "bullshit?"

Who still supports and books this dumb dude

no I was there last night we all want to just one more song The Venue didn't approve it they turned off the mics and speakers so we couldn't play anything so Johnny he picked up the microphones disconnected and threw them on the floor smash them completely broken that's when the cops came that's what they came for for damaging the microphones ^^ Wow, what grade did you stop going to school? Hello run on paragraph. Mongoloid.

I like jonny Craig as a singer, slaves and the previous bands he's been in. I'm a fan of his music But he's an idiot. He behaves like a child.

LOL sounds like he deserved to get arrested. it's amazing how you children don't understand the wrong in this situation. and the name of the band? even more terrible than acting like a child on stage bc venues have SET TIMES. maybe you kids should stay home and not be out after your bedtime.

You like his music? You're an idiot. You still support after years and years of proving how scummy of a human he is? You're an idiot. You're a label or band that continues to enable this moron? God, I hope for the absolute worst to happen to you. Kill this fcker already

"In response, the police handcuffed and arrested Jonny for criminal damage. This was obviously an excessive use of force" ...white people

Should've given him life.

Is no one else wondering why they weren't using their own microphones? I don't think I have ever seen a band, at least for the singer, who didn't have their own microphone. Seems like a weird thing to not be having on hand and counting on $20 venue microphones to reproduce the sound you are trying to make a living on.

Someone needs to Old Yeller this dude

LMAO. He has received his own super bad ass mics SEVERAL times...pawns them for drugs after the end of tour. so. his label probably gave up on that. Someone in Sacramento mentioned they had "difficulties" during their set because of technical stuff causing him to leave the stage All that shit is just translation for him being fcked up out of his mind because its the end of tour and he doesn't give a shit. dude is fcking trash

I would legit love to bend Jonny over and toss his salad. No homo.

Their response is so bogus, he didn't "drop the mic" if you watch the video he literally throws them down as hard as he can, one at a time. And I know they put quotations around it like he didn't drop them the usual way, but that was a tantrum. He's such an infant to be in his 30's.