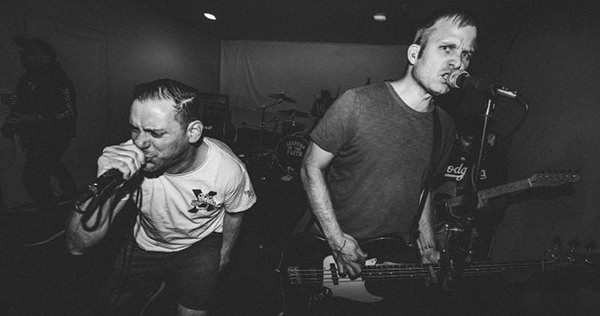 photo by Dan Patrick
Official press release: Newly-formed California-based hardcore outfit Berthold City will issue the band's official debut with the Moment Of Truth 7" in March. Formed in 2017 by Andrew Kline -- guitarist for Strife and World Be Free and WAR Records owner - who here commands the mic, Berthold City's lineup is rounded out by guitarists Dennis McDonald (Internal Affairs) and Devin Vale (Final Fight), drummer Adam Galindo (One Choice), and bassist John Eightclip (Allegiance). The straight edge band released a three-song demo last July and have been keeping busy playing shows with such bands as Terror, Judge, Decline, Regulate, Dare, and Fall Silent, among others. Written in the musical and lyrical spirit of the seminal Judge 7", Kline wrote all the songs and recorded them with Galindo. Berthold City's upcoming Moment Of Truth 7" was tracked by Aaron Jamili at Wormhole Studios and mastered by Don Fury, the NYHC legend who has worked with everyone from Gorilla Biscuits to Agnostic Front to Youth of Today. The 7" will include three songs from the demo, plus three additional cuts tracked during the same session. "I started the band because I was frustrated about the current state of hardcore and I felt like I could make a positive impact and lead by example," says vocalist Andrew Kline about his new band, Berthold City. The guy knows a thing or two about hardcore. Since the early '90s, he's been throwing down guitar riffs in Strife, and more recently, World Be Free. "A lot of people like to complain about hardcore, but not only do they rarely go to shows or support hardcore bands, but they don't do anything to make hardcore a better place." "I feel that the message is as important as the music, and Berthold City definitely has a message without being overtly political," offers Kline. "Also, this is my first time singing in a band. Every band that I have been is has been limited by what the singer is able to do and how much time they can commit to the band. I figured if I really wanted to do a band my own way that I would have to put down my guitar and step up to the mic." Kline's WAR Records will release the Moment Of Truth 7" on March 30th; stand by for preorders, audio samples, and more on Berthold City to be issued in the coming days. Berthold City will play at United Blood Fest on April 7th in Richmond, Virginia alongside the likes of Turnstile, Shark Attack, Death Threat, Fireburn, Ecostrike, and more, with additional tour dates being finalized for announcement. Moment Of Truth track listing: 1. Moment Of Truth 2. Left For Dead 3. Enough! 4. This World On Fire 5. Like Knives 6. Walls Of Hate