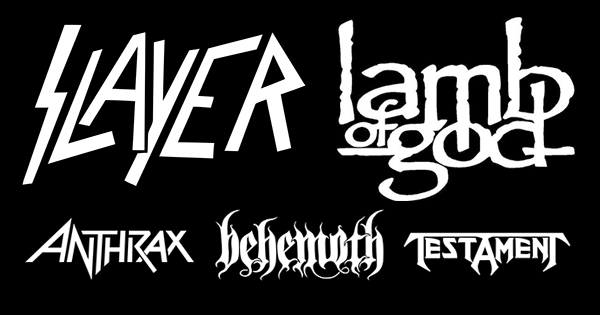 Earlier this month, Testament guitarist teased a large North American tour, calling it one of the "biggest tours of the year." If a newly leaked show listing is any indication, the trek will take place this spring/summer and feature Testament along with Slayer, Lamb Of God, Anthrax, and Behemoth. The leaked show is as follows: 6/4 Reading, PA @ The Santander Arena Expect a formal announcement very soon.

Emmure should be on this-honk honk

A lot of our brethren aren't going to need tools when hanging sheetrock today. After hearing about this tour, the crew better be wearing their hard hats on site, because there is going to be hard dick fcking sheetrock to the walls everywhere.

lose lamb of god and behemoth and combine the exodus / municipal waste tour with this and I'll get shitfaced and not go.

Weren't LOG supposed to be going on hiatus after the end of last year's tour?

$12 draft beers are stoked, as are DUI checkpoints within a 10 mile radius of each venue.

Mexican Tom is stoked, bout to get his knees broke in the pit

Guaranteed, all of the "people" that will attend this are Sheetrock, drywall, concrete, mansonry if you will, workers.

Special guest is going to be AILD at some select dates

100% of the commenters are unable to lift 1 sheet of sheetrock above their head.

anonymous2 hours ago 100% of the commenters are unable to lift 1 sheet of sheetrock above their head. Pretty sure I can lift you over my head, then break you in half on my knee

A BIG PIECE OF SHEETROCK FADED AWAY FROM US TODAY.

Araya is from GoT idiots.you know, Westeros

$12 draft beers are stoked, as are DUI checkpoints within a 10 mile radius of each venue. This is kinda true but with that being said I will be one of those idiots paying $12 for beer....Repeatedly

I went and had the best time of my life!! Never been to a metal concert before and was in the pit!! And I'm a ol country woman. You all missed a incredible show!!