Wednesday, January 3, 2018 6:27 AM PT / 5,613 views
Annual music and arts festival Coachella has announced the lineup for its 2018 installment, set to take place April 13-15 and April 20-22 at the Empire Polo Club in Indio, California. Tickets go on sale Friday, January 5. (For those of you who like heavier music, there's virtually nothing for you beyond The Bronx and A Perfect Circle.) Here is the full lineup: 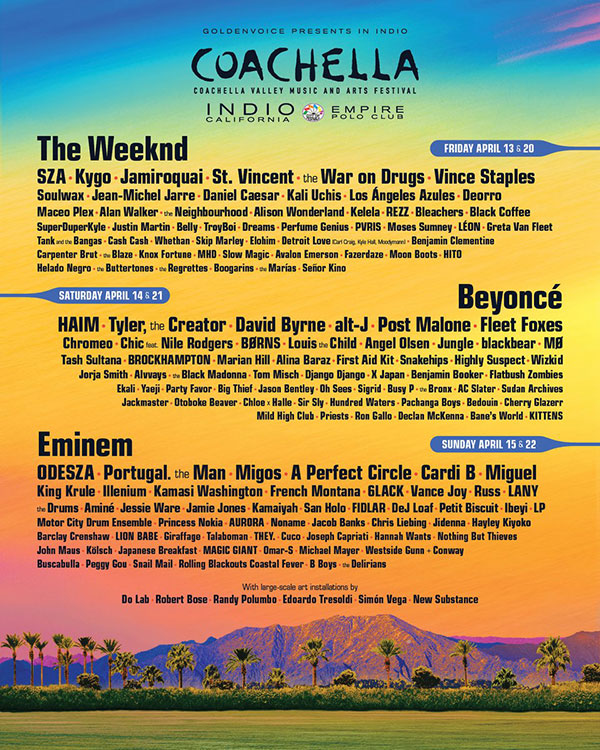 this isn't metal or hardcore news. lambgoat be posting anything to do with music.

jesus, this is the worst lineup I've ever seen. lol at anyone who pays whatever the ridiculous price is for tickets.

(For those of you who like heavier music, there's virtually nothing for you beyond The Bronx and A Perfect Circle.) Why post then? Like A Perfect Circle is heavy. Shit, they're the lite Tool

Lambgoat in a nutshell:" For those of you who like heavier music, there's virtually nothing for you beyond The Bronx and A Perfect Circle."

How did a festival get booked without Code Orange on it?

Since Tyler, The Creator is there maybe he'll bring Trash Talk on stage with him since they have to run around on that yuge stage. That would be HAAAAARRRRRRRRRRRRD

"Webby, show me that dong" - no girl ever

Curious as to why A Perfect Circle gets an honorable mention, but webby ignores Highly Suspect and Greta Van Fleet. APC is good, but not a heavy band.

SUP GUYS- THE BLACK DUDE FROM DOWNSWING HERE. JUST GOT DONE RUNNING A TRAIN ON OUR BIH EMILY M, AND I LOG ON THE PC TO SEE THIS SHIT. DOWNSWING SHOULD BE ON THIS. ITS NOT FAIR. WEVE BEEN WORKIN OUR ASSES OFF BANGING SCENE GIRLS AND STEALING TUI RIFFS FOR LIKE A YEAR NOW. WHENS IT GONNA BE OUR TIME. WELL ANYWAY IF VINCENT BENNETT PROMISES YOU A COACHELLA SLOT FOR SUCKING HIS DIAMOND CUT dck, ITS A LIE BRUH. SWINGSTYLE 2018 BABY

These things get worse every year.

How did a festival get booked without Code Orange on it? LOL This is the real mystery. code kids forever!!!

anyone in Hollywood notice the code orange billboards everywhere. WHY

Code Orange KIDS is hype trash, go be on WWE again ya faaggots

Just so many vanflips to hope for.

This lineup post is fake news at its finest. ALID, Zao and Emmure are the actual headliners with a possible DEP reunion show.

no room for throwdown doing a 15 year anniv of Vendetta? I call bullshit fck u