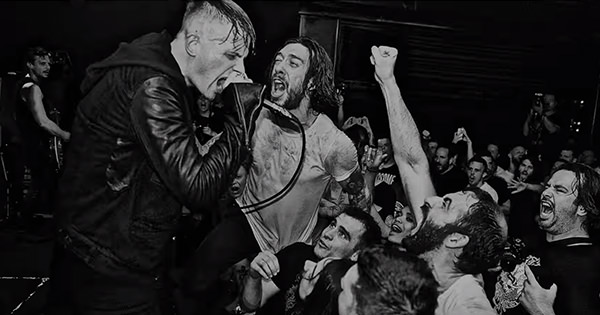 Official press release: Rise Records and celebrated Boston hardcore quartet American Nightmare are pleased to announce the band's forthcoming self-titled full-length album. Being released on Friday, February 16, American Nightmare represents the band's rise from the ashes, expanding their legacy and reestablishing the band as titans of the genre in the process. The enigmatic act may have only released two full-length albums since forming nearly two decades ago but after temporarily losing their name, changing members and breaking up, the band has returned with a dark hardcore record that pays homage to groups who have always influenced its sound ranging from Negative Approach, SSD, and The Cro-Mags to those extending beyond the realm of hardcore such as Joy Division and Siouxsie And The Banshees. Check out the first track from the album, "The World Is Blue," now streaming in full on YouTube here: Recorded in Boston, MA at Mystic Valley Recording Studio by drummer Alex Garcia-Rivera, American Nightmare features vocalist Wes Eishold, bassist Josh Holden, guitarist Brian Masek and Garcia-Rivera who were all part of the last original lineup of the band that disbanded in 2004 (and somehow American Nightmare even got their highly prized band name back after temporarily changing their name to Give Up The Ghost). The album also signifies the first truly collaborative record the band has written with all members contributing to its creation. Adhering to a writing process inspired by the Smiths yet evokes Black Flag, and is dripping with the angst-driven nihilism that has defined the act since their inception, the album is the result Eisold feels represents the true essence of the band. "In making this record we had one goal: To make a hardcore punk album that was true to American Nightmare, who we were then and who we are now," he says. "No filler, just existential poetic venom. This is ground zero, a new life for the band." For every pit-worthy ripper like "Lower Than Life," there's a more meditative yet equally explosive song like "Dream," and that distinctive dichotomy is something that American Nightmare had always hoped to achieve in its own bleak way that truly transcends hardcore. "Thematically this album is a response to the old lyrics, a reassurance of all of the uncertainties and existential fears," Eisold explains if titles like "Flowers Under Siege" and "Crisis Of Faith" weren't telling enough. "I still struggle daily with whatever lasting depression I unfortunately inhabit in my head; it's deep-rooted and I needed to get this out in this form." Despite his success with acts like Cold Cave and Some Girls, there is a reason why American Nightmare will always have a special place in Eisold's heart and you can feel that while listening to the album. "This is a new start, it really is. We are now in the band we always wanted American Nightmare to be with the lineup, the songs, and the name back," he summarizes. "It feels full circle in the sound of the music referenced earlier, but it also feels complete in that we took the reigns of the band and its past and made a new American Nightmare album … and now we are ready to move forward with it." American Nightmare track listing: 01. The World Is Blue 02. Flowers Under Siege 03. American Death 04. War 05. Gloom Forever 06. Lower Than Life 07. Colder Than Death 08. Dream 09. Crisis Of Faith