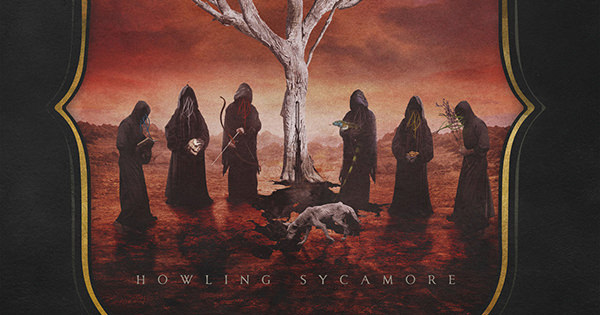 Official press release: Multi-talented guitarist and producer, Davide Tiso (Ephel Duath, Gospel of the Witches), has announced the formation and signing of extreme progressive metal outfit, Howling Sycamore, to Prosthetic Records. Tiso elaborates, "Howling Sycamore was born from the stubborn idea of melting together different styles of heavy music into something powerful, sincere and with a strong identity. I wanted to mix extreme metal drumming, layered down-tuned guitars and old school prog metal singing. I'm so grateful that these amazing musicians helped shape the album into the beautiful weirdness that it became." The musicians he speaks of are none other than former Watchtower and Dangerous Toys singer, Jason McMaster, and drumming sensation, Hannes Grossmann (Necrophagist, Obscura). The self-titled album will be released on January 26, 2018 on all digital platforms, compact disc and a limited edition, silver vinyl LP on Prosthetic Records. You can stream the first track, "Upended", here: Tiso comments on the signing: "I can't imagine a better way to launch Howling Sycamore than signing to such a good label as Prosthetic Records. I have believed in the potential of my new band since day one but I was somehow convinced that due to the peculiarity of the songs themselves, the natural trajectory of Howling Sycamore would have a much more low key starting point. The fact that our debut album got the attention of such a respected label makes me dream even bigger for the next steps ahead. Prosthetic Records has always supported forward thinking bands that pay a certain amount of attention to technical proficiency. For most of my career, my music has been labeled in the same way: it felt right to join forces." It took approximately a year to put the album together. During this time, some very special guest musicians had the chance to contribute to the songs: Bruce Lamont (Yakuza, Brain Tentacles) on baritone saxophone, plus Kevin Hufnagel (Dysrhythmia, Gorguts) and Fester (Burials, Humorous) on guitars. Howling Sycamore track listing: 1. Upended 2. Obstinate Pace 3. Let Fall 4. Intermezzo 5. Midway 6. Chant of Stillness 7. Descent to Light 8. Dysphoria