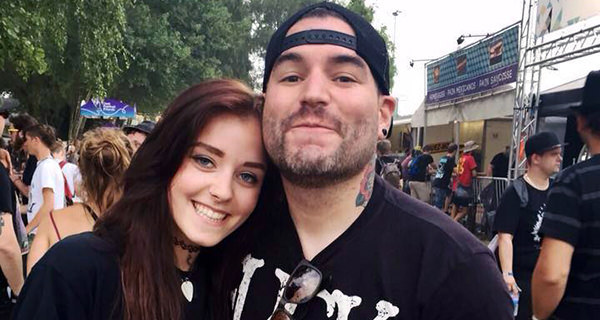 The shockwaves of sexual misconduct allegations against myriad Hollywood celebrites has, naturally, spilled over into the music world. Among those being accused this week (in addition to Jessey Lacey, Austin Carlile, and Jonny Craig, among others) is Suicide Silence vocalist Eddie Hermida. The allegations against Hermida came to light on Monday, November 13 when Belgian woman Verena Celis posted a lengthy account on Twitter of her interactions with him, including the 2015 and 2016 exchange of nude photos when she was 17 and he 32. You can view those tweets below. Celis also claims to have subsequently made contact with other girls who've had similar experiences with Hermida. Hermida has yet to comment on the matter and we cannot corroborate her version of events, so take this for what you will. Summarizing her predicament and current feelings towards Suicide Silence, Celis says:
"He made me feel worthless and like I never meant anything to him, but I know he was just afraid for some reason. This statement is not about bashing the band in its entirety, because I still love the others as much as 6 years ago. I still support them. Just not Eddie anymore. Please, if you are underage and a band member is hitting on you, speak up. You're not alone. I promise."
UPDATE #1: Celis has removed her Twitter "statement." UPDATE #2: Hermida has now issued a statement on the matter.

My statement after it has been highly requested (thread) pic.twitter.com/MmKwHrG2HB

Shortly issuing her statement, Celis addressed her detractors:
"Since people are calling me crazy, attention seeking, weak minded, and telling me I'm not a 'real' abuse victim, I have decided to take my statement down because I don't want to deal with all that negativity. Mind that all those people being negative were white males about the same age as Eddie... Stop blaming the victim. Thanks."
[via RockNation]