Every Time I Die guitarist sued for injuring woman during show 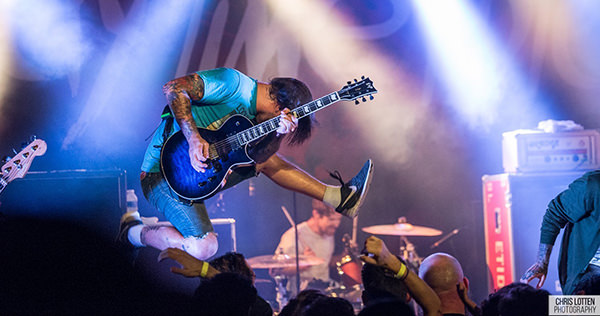 Every Time I Die guitarist Jordan Buckley is reportedly being sued by a woman seriously injured after he allegedly lept from the stage and landed on her head during a summer show in Michigan. The revelation comes via a report at WXYZ in Detroit. The incident took place at the Crofoot Ballroom in Pontiac, presumably during the band's August 13 stop at the venue amid their U.S. tour with Taking Back Sunday. The victim, Tonya Ross, said she suffered "catastrophic injuries" as a result of the incident.
"Ross said Buckley didn't warn audience members of his intent to jump into the crowd, and she also said she was completely caught off guard."
After consulting her primary care physician the day after the show, Ross was told that she had suffered a neck fracture and concussion, necessitating physical therapy and medical treatment that remains ongoing. Neither the band nor Buckley has publicly comment on the matter thus far. [via ThePRP]