Knocked Loose, Terror to tour together 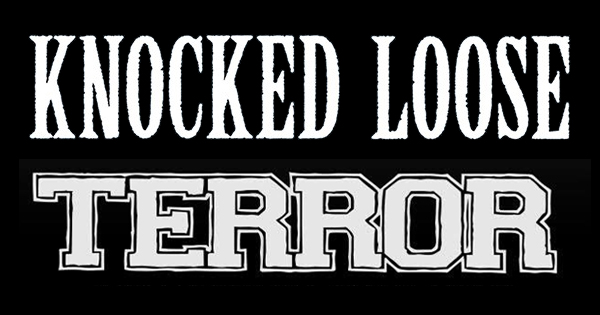 In a newly released episode of 'The Jasta Show', hosted by Hatebreed frontman Jamey Jasta, it was revealed that Knocked Loose and Terror would be embarking upon a tour together in the near future. Jasta spilled the beans mid-conversation with Terror frontman Scott Vogel by stating, "By the time this airs, I think the tour with Knocked Loose will be announced. If not, I'll edit this out..." Obviously, the trek has yet to be announced, but based upon the forthcoming touring schedules of the two bands, which finds one or the other engaged through January, it seems likely that this tour will commence in February. Notably, Knocked Loose will be headlining over Terror, a scenario which Scott Vogel explained as such:
"We told some people the tour is happening and they're like, 'You're going to play before Knocked Loose?!?!,' and I'm like, 'yeah, they're bigger than us'. You just have to put all ego aside and do what's best. To be like Terror, a straight-up hardcore band that's survived for 15 years, you've got to play to young kids... I haven't worked [a day job] in 13-14 years, so in order to do that you've got to put your ego aside and play where there's going to be new, fresh faces."
Assuming the trek is still happening, expect an announcement very soon.

who the fck is knocked loose?

terror is passable. knocked loose is def better and metalcore. AILD is better than both

Scott Vogel here, just reminding you The Ghost Inside is not a hardcore band

"Knocked loose is a beatdown band"

Doug funny here. I got caught master bating in the school library

I can't wait for this tour to get announced so everybody under 25 can stomp out signals on social media trying so hard to one up themselves on hating Knocked Loose and to divorce themselves from the fact that they listened to Attila 4 years ago and spent $350 on 1988 Gorilla Biscuits shirts on merchswap to cultivate this image of real hardcore that's not nu metal-core or what they wanna call it.

^^^ thought green day was punk rock. Also scott not letting Throwdown headline over both Terror and Knocked Loose is insane...after all they are doing Vendetta in it's entirety...or they should b, b.

Shane from down in it here. Can I do merch for this?

STFU about "Terror is passable" or hating on KL. Scott brings up a good point; you have to let the younger bands take the spotlight at some point. not the biggest KL fan but they're touring with some big bands and doing their thing so props to them. This tour will draw.

Props to Scott and Terror for this decision. Also, props to him for putting his ego aside for the sake of growth. Hardcore is full of elitist dckhole bands i.e...... Twitching Tongues, Criminal Instinct, Trapped Under Ice, etc. who think so highly of themselves. All your fcking bands suck and the douchebag HXC gays that come out in droves to THIC aren't better then Warped Tour/Knocked Loose crowd that they hate and make fun of so much. fck you all!!!! Long live TERROR.

Will be there for Throwdown doing Vendetta in its entirety

Vogel is better then I thought

Every newbie chapter of Suicide Krew is stoked.

mike smith here, pls listen to my band. i promise it sounds a little like neglect.

c-ckED LOOSE IS fckING TERRIBLE,terror are retards for opening for them fcking clowns!!! Eaten alive willl not be playing because their homo adds guitarist is dead THANK GOD !!!!!hahahaha

Emmure is already on this.

After reading years of vogelisms, I predicted this would happen.