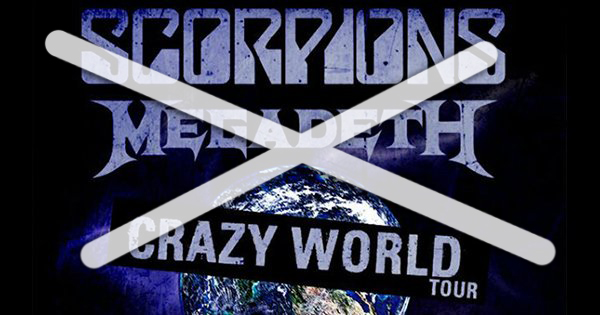 The remainder of the Scorpions and Megadeth U.S. tour has been cancelled. The following statement has been issued:
The Scorpions regretfully announce that due to severe laryngitis, the remainder of the U.S. 2017 tour with Megadeth will be cancelled. Klaus Meine has been advised by top throat specialist in Los Angeles to rest his voice. If he continues the tour, he could risk permanent vocal damage. The band stated, "that they truly hate to disappoint our fans, and hope to come back to America soon, but this time we have no choice but to cancel." *Tickets refunded at point of purchase.

Not a damn one of the 11 posters on this site would have gone to this anyway, not sure how this is news.

Replace Scorpions with Throwdown doing Vendetta in it's entirety and tour is ez.

Replace Scorpions doing Vendetta in it's entirety and tour is ez.

I have a penis

Replace Throwdown with Megadeth playing tiptoe through the tulips and you got yourself a deal.

No throwdown baby got back, no care

I hope those 34 people get their full refund on those tickets.

Dads are not stoked

Remainder of Scorpions is a sick fcking band name

I saw them a few weeks ago because my friend had an extra ticket. Megadeth only played 55 minutes but were decent, no flipouts by singer. Scorpions which i never intended on seeing before were actually mind blowing at times when they played stuff i'd never heard before. Guitarist is pretty sick. But they have been together almost 50 years I would hope you're awesome by that point.

The beets should be on this honk honk-Skeeter Valentine