For The Children 2017 announced 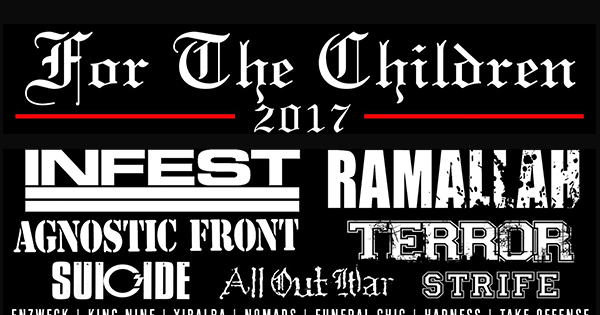 Predicting Ramallah is the band some guy gets stomped out onstage to by 15 people this year, carrying the torch passed to them by 100 Demons.

Thank god this isn't at Union again. Sick lineup too.

Strife on this, gonna have to consider attending

Thought Martyr AD was gonna be on this, wtf bro

With where they are listed, I'm guessing that's another special Ramallah/BFB set.

no THROWDOWN doing Vendetta in it's entirety no care.

Lifers will have to mow a TON of lawns to afford to go to this. Not to mention beg the shift leader for time off. All about the scene though BROOOOO

Such a heavy lineup but no Vanna?

No 18v? Throwdown? Bleeding through? Suck my d

fsu are gonna beat their girlfriends with the donated toys

where is full blown chaos, first blood and yes throwdown

I know this is where people go for anonymous roasting and things they would get beaten down for saying in real life, but on the flip side this lineup is insane and it's great to see hardcore is in such a great spot after all these years.

Hardcore is for kids. Grown men should stay home

Put this festival on a boat and then sink the fcking thing.

Is one choice still edge?

Thank god this isn't at Union again. Resident and Globos are far worse than Union.

Globos is a perfect size for packing people in like sardines for big shows. The big pillars are a pain in the ass though

Which laid to rest are we getting

I wonder if sons of anarchy is gonna show up..oh sorry I mean those gays in cyc.

yo dis Rick Healy, meet me in da pit if you ain't c-mmin Correct. Me and Eddie Leeway will have exclusive merch, only available behind da venue. NYHC, no herb shit. Real OG HC.

hardcore is corny, start listening to post-rock and indie folk like everyone else who dropped out

It's an insult to not include THROWDOWN on this doing Vendetta in it's entirety. Almost deplorable.

Globos is a perfect size for packing people in like sardines for big shows. The big pillars are a pain in the ass though It's a dump run by morons. The upstairs is inexcusably shitty. Downstairs also sucks just not as bad. Sound is generally crappy, the pillars suck, the set up sucks. I'd rather suck your mother's c-ck than go to a show there.

I hope cyc gets beat up again so their "President" david pearce can run away and leave his crew to get stomped out all over again 325 !