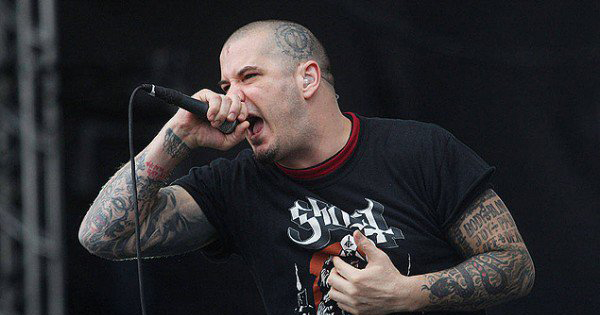 Vocalist Phil Anselmo (Pantera, Down, Superjoint, Scour, etc.) has announced the forthcoming debut record from his En Minor project. The band's debut will be released in early 2018 through Anselmo's Housecore Records. During a recent interview through Jimmy Cabbs' "5150" series, Anselmo described En Minor as influenced by, among others, 80s alternative/goth rock bands like The Sisters of Mercy and The Cure:
"I have a record coming out that's been finished for two years almost now, of course — just like every other fucking record. It's with a band called En Minor. And I guess it would be my, 'Hello, great dark eighties of Sisters of Mercy, of The Cure 'Seventeen Seconds' record and 'Faith' album.' Early The Cure. Early U2. Nick Cave and the fucking Bad Seeds or The Birthday Party. David Bowie... I take all these influences and then somehow we came out with results. "It is what it is. I'll let the people decide at the end of the day. And we'll see. But, once again, I'm not shootin' for radio time here; I'm just trying to broaden my horizons, write some harkening songs. But I think they have their own life, honestly. It's retro only to a certain degree, I think, within me, because I know where it's coming from. But I guess when a listener hears it these days, most people react… I hear the word 'cinematic' a lot, and I hear, 'This is the best record you've done in thirty years,' or some shit like that, something like that."