After reportedly selling out their Los Angeles (December 30) show "in less than 60 seconds," original Misfits members Glenn Danzig and Jerry Only (along with Doyle) will play a Las Vegas show two days prior. The newly announced gig will take place on Thursday, December 28 at the MGM Grand Garden Arena in Las Vegas, NV (see below). 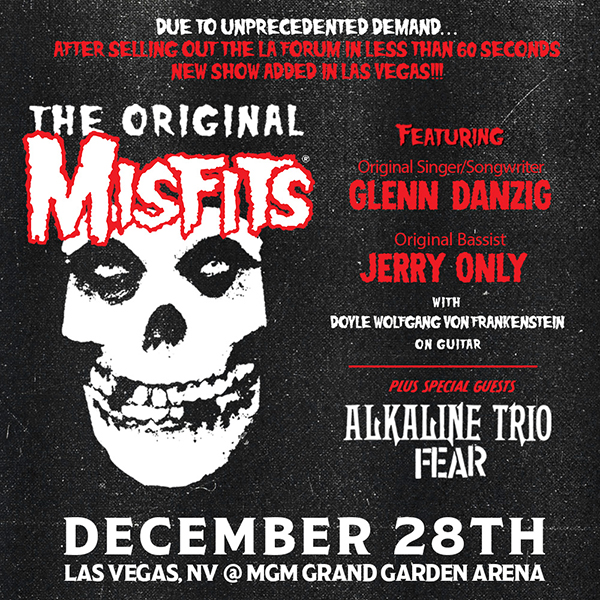 Who cares!!! We want young Danzig, not grandpa Danzig! Why Alkaline Trio?

Tim Lambesis will be at this show to suck dck

Jerry Only totally would stand for the National Anthem. I have a feeling Glenn Danzig takes a knee... what does tim do?

why is FEAR opening? who the hell is alkaline trio? John Belushi is spinning in his grave...

I see Danzig is still too afraid to have North Side Kings open.

The Misfits are fcking terrible shit.

"yeah, but where are the crazy fists?" - nap wheezy

Will be there in my Misfits shirt I got from Hot Topic.

Do to unprecedented demand they are going to tour off of this forever and make that $ I hope so.

What's the capacity at this place?

Most of you have never been in a fight or punched in the face by a much bigger person.

Nothing is more punk rock than playing at the MGM grand....

^^So in order to be punk rock you have to only play in church basements and house parties? Douche

venue will be 1/3 capacity best case scenario. an evening with Tim and original AILD = sold out back to back nights. fact

As long as people keep coming out to these shows they'll keep doing them. You know Jerry is just stoked to be playing for more than 50 people a night again

heard from a reliable source these bitches are 'flat earth' believers

LOL @ FEAR opening. Lee Ving is a douchebag x 1000. He supports Trump, right? Talentless hack. He's so nothing as an "actor" he's not even Z-List. He has always thought he was some toughguy. Yo North Side Kings guy please show up and taunt Danzing mercilessly haha.

Looks lame when they keep putting doyles name little/ downplaying his role, he's been in it longer than Danzig is/was ha. 28 out of the groups 30 years compared to Danzigs 8 out of 30 ¯\_(?)_/¯