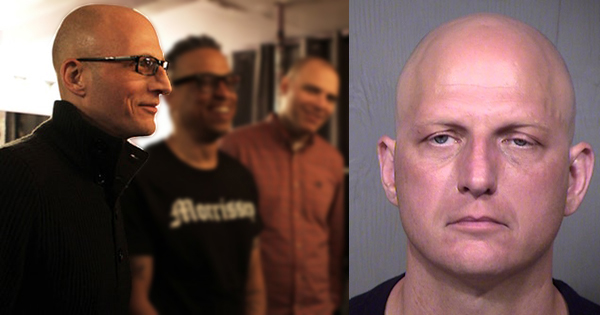 don't you aging emo's have large enough guarantees that would prevent the urge to shoplift? your band is shit anyhow. Rot in sheriff Joe's pink prison.

he couldn't just ask serg for a few bucks? SAD.

They should really offer an array of Instagram filters for celeb booking photos, since they get released to the public eventually.

He had to steal because he still owes Cory Brandon money

Ask Trump for a pardon

I have a feeling this will quickly overshadow the Decapitated story

Shoplifters of the world...unite and takeover!

decapitated: man, we did some dumb shit this week... tom capone: hold my beer

I BEEN CAUGHT STEALING. ONCE. WHEN I WAS FIVE

damn can't an emo get a break these days? prolly just some juice or hot fries, no biggie

That's what happens when you join the Alt Right Tom.

Pretty insane he couldn't afford M&M's at a truck stop

"According to a police report, Capone was observed on closed-circuit television shoplifting from the CVS pharmacy near Jefferson Street and First Avenue."

He was probably caught stealing a pack of American Spirit cigarettes.

That was rather BOLD of you, Tom......I'll see myself out

This dude worked at a guitar shop in NY and I heard he stole guitars every week by taking out the cardboard boxes and leaving a guitar or 2 in there.

he needed some KY jelly to go with his peanut butter crackers but his pink purse is what gave him away...

This dude worked at a guitar shop in NY and I heard he stole guitars every week by taking out the cardboard boxes and leaving a guitar or 2 in there. I used to do shipping at a music instrument store, and I thought about trying this all the time. I thought better though. Seemed way too easy.

Being a criminal mastermind obviously runs in the Capone family

cvs has absolute retards working there, how the hell did he get caught

That was a Bold move

cvs has absolute retards working there, how the hell did he get caught Read the article moron. Off duty cop was right outside.

*shoplifters of the world unite* and as far as asking serj for a few dollah's this guy needs money,NOT foodstamps.^broke ass sage.

He obviously has a problem that's beyond shoplifting. Be a fcking human and stop shitting on him and support him to find recovery. None of you would be commenting if his music never touched you. Have a heart for a broker her in need

Have a heart for a broker her in need<--- ENGLISH MOTHERfckER,DO YOU SPEAK IT?

Al is rolling over in his grave over this petty clown. FONOTUR ANNE

"This dude worked at a guitar shop in NY and I heard he stole guitars every week by taking out the cardboard boxes and leaving a guitar or 2 in there." That move is called The Itow