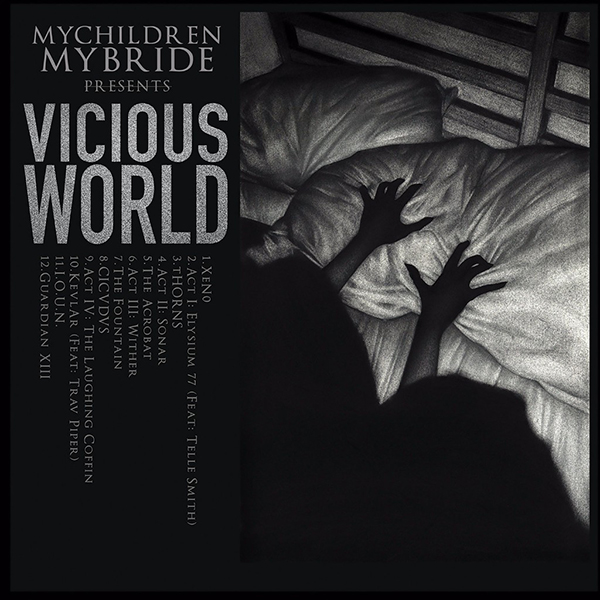 Madison, Alabama metalcore unit MyChildren MyBride has confirmed plans to release a new album this fall. This will be the band's first LP since their 2012 self-titled effort. Recorded with producer Travis Richter (From First To Last), the new record has been titled Vicious World and is slated for an October 13 release through Entertainment One Music / Good Fight Music. To coincide with the announcement, the band has debuted a new track titled "Thorns" via Alternative Press. According to vocalist Matthew Hasting, "'Thorns' is the love child of Marilyn Manson and Advent, a song you can move and bang your head to, and just a small taste of how far we pushed ourselves on this new record." Hasting added, "It's been quite some time since MCMB has released music, and we're extremely proud and excited for you all to bounce along with us to this song." Vicious World track listing: 01. XeN0 02. Act I: Elysium 77 03. THORNS 04. Act II: Sonar 05. The Acrobat 06. Act III: Wither 07. The Fountain 08. CICVDVS 09. Act IV: The Laughing Coffin 10. KevlAr 11. I.O.U.N. 12. Guardian XIII

Brian Hood was the only good thing about this band. He wrote and recorded all of Unbreakable. This goes to show that Matthew and Robert are just talentless pricks. This song is just horrible.

I wish it would have been Matthew instead of Brian.

my children, my toilet

No one even asked for this.

Mcmb are a great time capsule of the MySpace days, diy merch with diamonds and cartoon octopuses, huge plugs, bass drops...take me back :)

Met these guys once. Bunch of douche bags. Remember when you guys were taking a break? Go back to doing that. This is awful.

This is ass and fck god

I thought these guys were on the way out literally 10 years ago... Is XMathewX still a scene kid or did he move to a barber/biker look

Coolin out in his favorite duds-his signature, purple zoot suit made famous on they 'wings or integrity' tour, walking gauges 'Matthew MCMB' takes a long draw from his pipe and sits back in the pew aisle. Lmao something about his shriveled, lime-green dingus I can't think of anything rn xD mabe try a lil later

Band was and is full of poser retards. Mid-2000 MySpace scene bullshit was the worst.

A plea for purging damn takin me back to the good day ;) high school, scene queen gf rockin my baby blue 'APFP' tee. Nerds turned wanna-be scene all tryna get wit that but who in her MySpace pic hm? XD lmao fat Andy ask the crowd who wanna take them to dinner after the show and it fell dead silent lol felt bad fat boys need food! lol it's the COWBOY WAY!

Christians swear advent is the heaviest band ever.

^ They're heavier than any bullshit you listen to, bitch.

this is complete trash. anyone who says otherwise is a beta cuck plebeian. they fringed on no bullshit metalcore in the mid 00s maybe a little after ... but this is oversaturated try hard down tune for posers.

I agree though. Without Brian Hood it feels like something is missing.

God is gay for allowing this to happen

Hot Topic CD sales are threw the gates. Warped tour tickets are literally sold out already for 2018. I herd their going to do a spilt album with For Today.

Wasn't going to comment, but god damn this is bad. Really bad. WAY past time to hang it up, boys.

^So basically air in my mouth? Ok then

Matt was a total douche when I met them in Tulsa. He was getting on to us for drinking and shit acting all self righteous. Then went inside and danced into a bunch of kids trying to hurt them even though he's a pssy. I bet he fcks little kids and snorts cocaine off their ass holes.

^Last time I hung out with Matt a few weeks ago he was getting big into mid-10's Tragic Hero bands and Fearless bands. He said this after seeing him weep to The Plot In You and Mayday Parade. Prolly on shrooms or some shit but damn, plebians.

I'm adding this to my library. Kinda has a 'Baptized In the Rio Grande. vibe to it. 9.5/10 easily

Not even trolling - really really bad.

Seems you're missing the point. MyChildren MyBride doesn't need an Advent influence. They are about the new era. I have a cousin in the industry. Nu metal/rap metal w/breakdowns is the thing right now, so far Of Mice And Men, Sylar, Cane Hill, Islander, Gift Giver, Fire From The Gods are on this.

^ your cousin doesn't know shit about what's "in"

^^ YOUR COUSIN IS IN... the closet. along with you. and john travolta and r kelley. and hey me too... its kinda nice in here

My Dying Bride is not stoked

My Cousin My Industry.

I hope Matt gauges his butthole

the fck is this 90's marilyn manson ass shit?