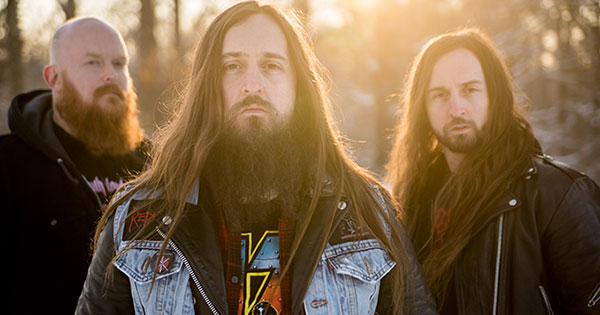 Richmond, Virginia death metal act Cannabis Corpse has now formally confirmed plans to release their next album late this summer. Launched in 2006 and featuring members of Municipal Waste and Six Feet Under, among other acts, the veteran act has previously released a handful of blazing, death metal-meets-marijuana records. Their newest creation is titled Left Hand Pass and is slated for a September 8 release via Season Of Mist (pre-order). Frontman Philip "Landphil" Hall says, "At long last Cannabis Corpse has come out of its weed induced slumber to bring all y'all head bangers out there a new slab of brutal death metal. This time around we decided to give our new guitarist Ray Suhy a lot more room to add his own unique flavor to the song writing and riffs. We think what has came out is a fresh sound for Cannabis Corpse." Today we're premiering the album's first single, "Chronic Breed," below. According to guitarist Ray Suhy, "'Chronic Breed' was one of the last songs we wrote for Left Hand Pass." Suhy adds, "We rewrote this one a couple of times before we got it to flow the way we wanted it. Hallhammer laid down some killer drum parts and Landphil's vocals are some of my favorite that he's ever done. There's lots of catchy and brutal moments on this record and "Chronic Breed" is one of my favorites!" Shortly after the record release, Cannabis Corpse will hit the road with Soulfly for most of their "Nailbomb - Point Blank" tour. You can check out those dates here. Left Hand Pass track listing: 01. The 420th Crusade 02. In Dank Purity 03. Final Exhalation 04. Chronic Breed 05. In Battle There Is No Pot 06. Grass Obliteration 07. Left Hand Pass 08. Effigy of the Forgetful 09. Papyrus Containing the Spell to Protect Its Possessor Against Attacks From He Who Is In the Bong Water 10. The Fiends That Come To Steal the Weed of the Deceased