All Out War announces new album 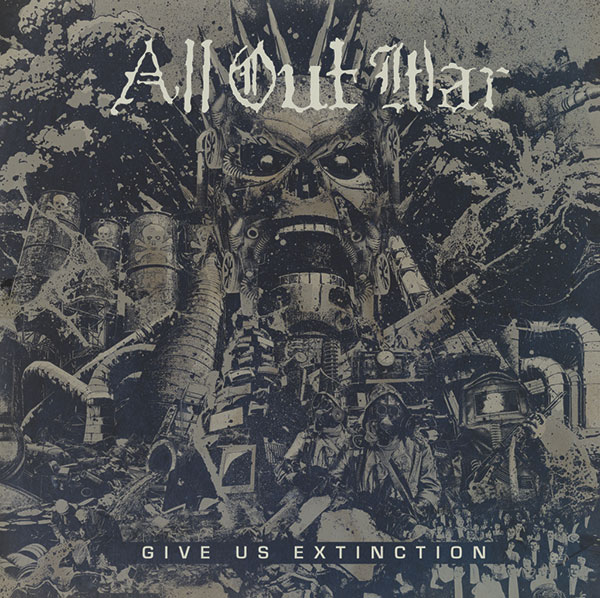 Official press release: Longstanding New York hardcore/metal overlords All Out War have completed their punishing new studio LP, Give Us Extinction. The album's details, artwork, and track listing have been issued this week, advancing the album's August 11th street date. Following in the smoldering wake of the band's 2015-issued Dying Gods extended EP, All Out War arises with arguably the band's most crushing material to date with their sixth official album, Give Us Extinction. With more than forty-two minutes of unchecked aggression, the new album sees vocalist Mike Score's scornful accusations at mankind strike with more venomous intensity than ever. The monstrous grooves and slamming breakdowns executed by drummer Jesse Sutherland, bassist Erik Carrillo, and guitarists Taras Apuzzo and Andy Pietroloungo leave craters of scorched earth in their wake with a monolithic NYHC-fueled mandate, while searing elements of thrash metal blaze forth from the wreckage. The album furiously delivers eleven original tracks, and the band pays homage to New York punk/crust icons Nausea with a cover of the band's "Cybergod." All Out War created Give Us Extinction at West West Side Studios (Hatebreed, The Dillinger Escape Plan, Turmoil) - the album recorded and mixed By Steve Evetts and mastered by Alan Douches -- and completed with grim artwork by Alexandre Goulet. Guest vocals are provided to the tracks "Choking On Indifference" and "Cybergod" by Emily Muscara (Straphangers) and the track "Carcass Rot" by Michelle Eddison (ex-Starkweather). Give Us Extinction promises to be one of the most devastating albums of 2017. Organized Crime Records will release the album on LP, CD, and digital formats on August 11th; preorders will be issued in the coming days alongside audio samples and more. Give Us Extinction track listing: 01. Give Us Extinction 02. Burn These Enemies 03. Worship The Cancer 04. From The Mouths Of Serpents 05. In Praise Of Leeches 06. Choking On Indifference 07. Carcass Rot 08. Circling Vultures 09. Ingesting Vile 10. Bodies For The Machine 11. Cybergod (Nausea cover) 12. Repulsive Premonitions