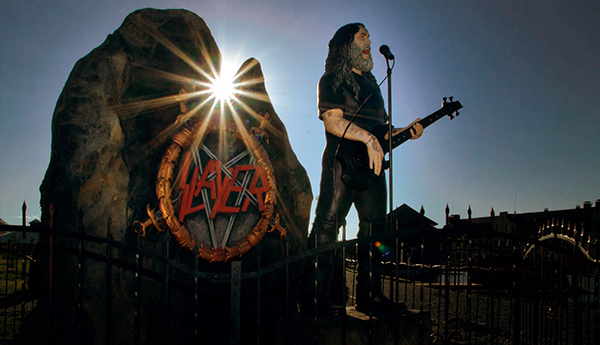 We have no clue why, but a Ukrainian zoo has formally unveiled a large sculpture of Slayer frontman Tom Araya, complete with a Slayer logo and some lyrics from Slayer classic, "Dead Skin Mask." A Facebook post highlighting the new addition to the XII Months zoo in Kiev can be found below. A rough translation of said post is as follows (via Loudwire):
"Dear friends, we have finally finished our discussions and alterations, and can say – a sculpture of Tom Araya in our park is completed and submitted for your critical inspection. I can not tell you how hard it was and how much we argued about the accuracy of, say, shape the beard) or Tom's guitar. I put the results of our work on the official website of Tom, I have heard that he is now back from Chile and the rest before the European tour – perhaps peep us. At least Sandra Araya (wife) told me that she liked. . God forbid. . . I also told her how things were arguing about any details on the sculpture and even joked that thankfully there that at the concert – and if the sculpture called, for example, Tom on the beach... I am pleased that Ukraine has paid attention to the whole army (millions) of Slayer fans and Tom. Take a look at his website) and all approval. Propaganda, war ensemble, burial to be."