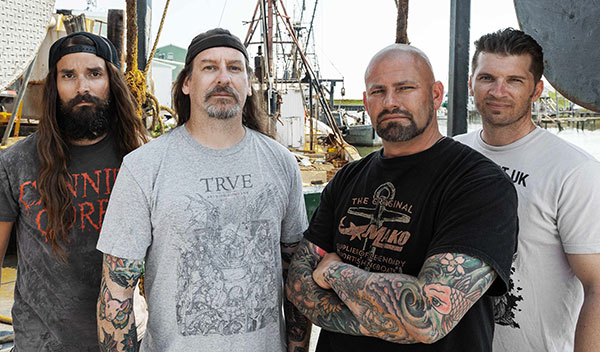 photo by Scott Kinkade
In February 2016, Burnt By The Sun fans were thrilled to learn that the majority of its members had reconvened in a band called River Black. Launched by guitarist John Adubato (Burnt By The Sun, Black Army Jacket) and drummer Dave Witte (Burnt By The Sun, Municipal Waste, Black Army Jacket, etc.), the pair eventually brought vocalist Mike Olender (Burnt By The Sun, For The Love Of, Endeavor) and bass player Brett Bamberger (Revocation, Publicist UK, etc.) into the fold and entered the studio with Eric Rachel (The Black Dahlia Murder, Municipal Waste) to track their debut album. Fast forward a year, and River Black is ready to unveil both their debut album and their first new song. Specifically, the band's self-titled debut will hit stores on July 7 through Season of Mist, and we're exclusively premiering its first single, titled "Low," below. Commenting on the track, Mike Olender had this to say:
"'Low' is an expression of horror at how religion can become twisted and manipulated by charlatans and demagogues. It was inspired by a news report I heard about a journalist who spent some time with the now-deceased Isis leader 'Johnny Jihad'. It revealed how this man used brutality with the purpose of inspiring others with similarly twisted minds. He used videos of his actions as recruiting tools. I was struck by the thought that there are people out there who not only wouldn't be repelled by these horrific videos, but actually excited and inspired by the images of this man gleefully sawing off the heads of the orange-clad victims kneeling before him. Faiths have always had these characters throughout history, but it is surreal to realize we are living in such dark historic times."
River Black can be pre-ordered now here, and its track listing is as follows: 01. Jaws 02. Honor 03. Low 04. Shipwreck 05. River Black 06. South x South 07. Boat 08. Move 09. #Victim 10. Haunt 11. Sink 12. Everywhere

washed up old dudes trying to hold onto something, let it go

Washed up old dudes. You must be very slow or haven't been out of your moms basement for years.

It's good, not as good as I wanted though.

it's no BBTS, but it will do

Tracks go hard from start to finish...Promo packs ordered. Been waiting on this for a while now, don't sleep. Also ordered new shorts as I just destroyed my old ones with a 720 spin kick, blew out the crotch...huge dong...your girl jealous of dong and spin kicks..fakecore jon post below. 'Deathcore Jon' np: Battlecross - Deception

^I don't get the point of this, at least mine were half funny

tool. not even a relavant band to be posting about, let alone backing. keep your garbage takes to yourself.

^I don't get the point of this, at least mine were half funny ^because it's funny to make fun of you for trying to be serious. Bro...gravemaker mesh shorts..for dayz

^ it wasn't me posting that, not dissimilar to your original flat offering on this thread. ruining it for everyone. this isn't even a relevant band for that persona. come on man

It's bad, as bad as I wanted though.

Burnt by the toilet

these jerks are a tough?

Argonauts destroyed. Not the best track to intro the band. Blood Runs Black needs a discography.

They win coolest cover album artwork of the year

As I listen to this for the fourth time my erection is near a breaking point. Listen again and my sac will be blown into oblivion. What do I do? Replay

""^ it wasn't me posting that, not dissimilar to your original flat offering on this thread. ruining it for everyone. this isn't even a relevant band for that persona. come on man"" ^^ Deathcore jon way mad he can persona anymore. :(

Burnt By the Sun pointed thier anger in the right direction and this seems like it will to. Pre-order is a done deal. One of the best, for real.

Awesome! It sounds enough like Burnt By The Sun to me. I'm pumped.