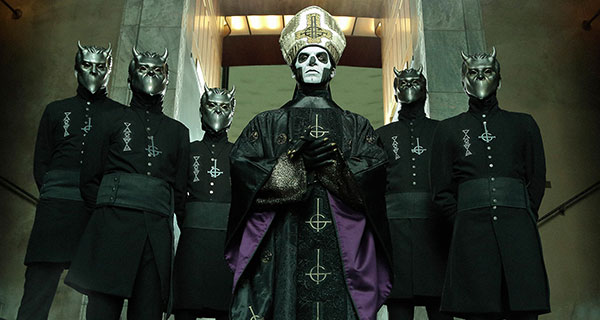 photo: Loma Vista Recordings
Swedish occult rock act Ghost will enter the studio this summer to begin the official tracking process for their next album. In an interview with Metal Wani, a Nameless Ghoul stated that recording would commence once the group wrapped up their North American tour with Iron Maiden. Regarding the new album, said Ghoul had this to say:
"The ideas for the new record will be 'darker' because it's thematically set in a darker setting. 'Meliora' was supposed to reflect some sort of utopia/dystopia of modern society, where this new one is gonna be a little bit more apocalyptic in a way, a little bit more back to medieval times." "The idea for this new album is to combine… So, where it's a record drowned and surrounded and drenched in death, it's going to be a record about survival. Constantly working with those sort of polar sort of elements is also a difference I guess between… If you find a black metal record that is about the plague and the death you will have only death, everything just is black and everything just ends black. "Where one of my driving forces writing a record like that is to write a record about the survival of that and the prosperity. Yeah, it's gonna be a darker record, is it going to be all through and through heavier? I don't know. Obviously we do have melody and we do have songs that are not so heavy, so from my point of view, from where I'm sitting knowing of a little bit of material coming in, it's going to be both. It's gonna have everything from heavy crushing metal to big ballady anthems."
You can listen to the interview here: [via ThePRP]