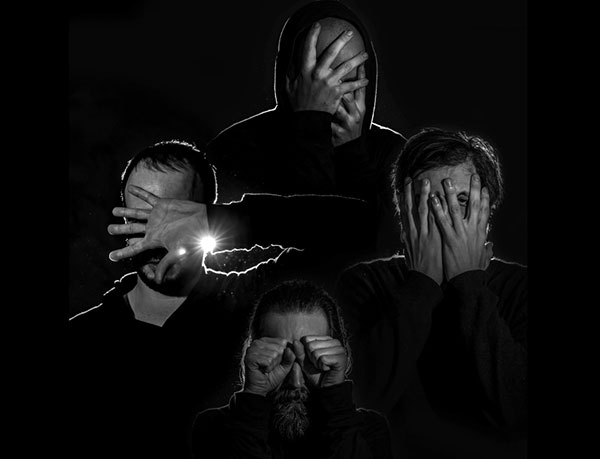 photo by Kristie Krause
This is February 15, John Frum Day. On this day, cult followers from all over the island of Tanna in the South Pacific nation of Vanuatu come to the village of Lamakara at Sulfa Bay to march, raise their flags and celebrate their esoteric way of life. This is also the day that the patron saints of altered states known as John Frum reveal to the world the first glimpse into their chronicle of auditory disturbances. Indulge your senses here: Consisting of current and formers members of The Dillinger Escape Plan, The Faceless, John Zorn and many other renowned projects, John Frum have been fermenting their bedeviled broth in the clandestine corners of their collective consciousness since 11.11.11. Like a planchette moved by the presence of subtle energies, John Frum functions as a medium for malefic musings. Existing at the intersections of perception, superstition, intoxication, ritual, rhetoric, metaphysics and mystical experience, John Frum welcome in the golden age of musical enlightenment with their first manifesto, A Stirring in the Noos. Nearly 6 years in the making, John Frum's unorthodox debut maneuvers through 40 minutes of darkly psychedelic and meticulously crafted death metal, the backdrop of a bad trip. A Stirring in the Noos is a dismal distillation of oneiric transmissions, an aural reliquary of mis-shapen manifestations, and a totem to modern primitivism in heavy music. A Stirring in the Noos will see its release this May via Relapse Records. John Frum borrows its name from a relatively isolated group of natives in the South Pacific islands, known as a Cargo Cult, who first used the alias John Frum as a means to reject European ways, escape oppressive missionaries, and return to their old traditions. The narrative changed, during the war in the 1940s, to reflect their encounters with thousands of American soldiers who spectacularly descended on that region by sea and air with crates of wartime materials dropped from the sky, known as "Cargo." These events drastically changed the beliefs and lifestyle of the islanders as they took the soldiers and their offerings to be god-like, as they descended from the heavens. Alt-religious narratives induced by these encounters were incongruent with islanders' long-held beliefs, yet the natives could not deny the call of the cargo. Attempting to reconcile their existing beliefs with the new understanding of the outside world led to some strange interpretations which evolved into a bizarre narrative about a dark-skinned soldier-deity who resides inside a nearby volcano, and who many believe will one day return, showering them in riches and technology. John Frum is: Matt Hollenberg (John Zorn, Cleric) guitar Eli Litwin (Intensus/Deveykus/Knife The Glitter) drums Derek Rydquist (ex-The Faceless) vocals Liam Wilson (The Dillinger Escape Plan, Starkweather) bass

this is going to be weak

Who are literally any of these guys.

Being back the Taste of blood

This is the most pretentious press release in a while. Get the fck outta here

Who writes this garbage? It's a press release. Get over yourself.

talk about a island of misfit toys.

Whoever writes this shit needs to be stabbed in the neck. Trying WAY too hard.

LOL KNIFE THE GLITTER. I remember that shit band.

"Bring back the Taste of blood" I would love to see this too. Derek, I know you'll read this. Play one last show. Also bring Animosity to headline.

I once ran into Rydquist and Bart Williams from BDM in LA. Long story short, Bart tried to get our attention to Rydquist and we stood there like Who gives a fck? Then continued speaking with Bart.