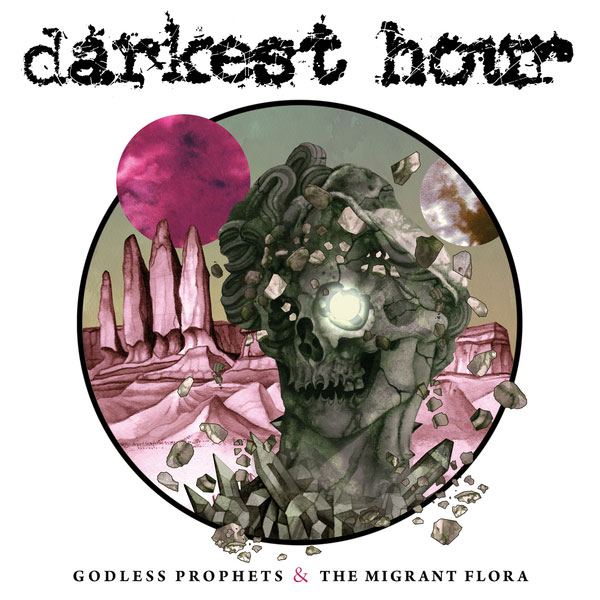 Official press release: Darkest Hour, the D.C. metalcore pioneers, release their ninth full-length album, Godless Prophets & The Migrant Flora, on March 10 via Southern Lord Recordings. The twelve-song album was part of a crowd funding campaign that the band launched earlier this year, with the ultimate tally netting the band well over 100% of the initial goal and allowing them to also create an album beyond their initial expectations. The band chose producer Kurt Ballou (High on Fire, Nails, Converge) for "his obvious genius" (as guitar player Mike Schleibaum said) and recorded the release at Ballou's Godcity Studio. Artist Shaun Beaudry was commissioned to create a custom painting, giving the album a unique visual identity. "Working at Godcity was the perfect vibe for this record and Kurt was everything we could have asked for in a producer," said Schleibaum. "The passion and experience he brought to the whole album really shows." Darkest Hour have since partnered with Southern Lord Recordings, which Schleibaum discussed, saying "The band has a long history of working with Greg and Southern Lord, who originally released the vinyl version of The Mark of Judas. While working with Kurt, we became reacquainted with Greg. We've always respected Greg's work ethic, creative prowess and steadfast dedication to quality." "Southern Lord is beyond stoked to be working with long time favorites Darkest Hour on their upcoming album! Their tasteful, seamless fusion of hardcore and metal as well as never ending dedication to underground music is both admirable and praise worthy," said Southern Lord founder Greg Anderson. Godless Prophets & The Migrant Flora track list: 01. Knife in the Safe Room 02. This is the Truth 03. Timeless Numbers 04. None of This is the Truth 05. The Flesh & The Flowers of Death 06. Those Who Survived 07. Another Headless Ruler of the Used 08. Widowed 09. Enter Oblivion 10. The Last of the Monuments 11. In the Name of Us All 12. Beneath It Sleeps