Hopesfall back together, working on new album 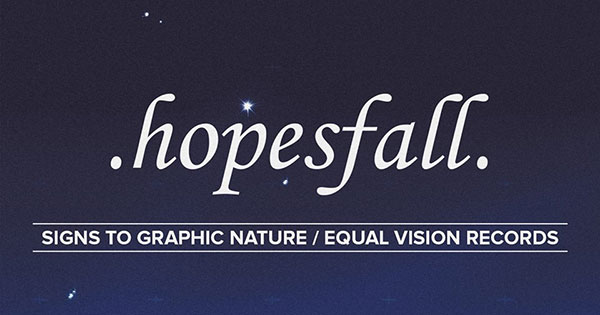 Official press release: Hopesfall has reunited and signed to Graphic Nature Records, an imprint of Equal Vision Records founded by producer Will Putney (Every Time I Die, Stray From The Path, Counterparts). This January, the band will head into the studio with Mike Watts (Glassjaw, The Dear Hunter, Hopesfall) to record their first new album in ten years. Today, Hopesfall has also announced the upcoming release of vinyl for a majority of the band's past discography, including: a second pressing of The Satellite Years available on clear with purple splatter (limited to 400) and clear with translucent blue center color in color (limited to 100: box set only), a first pressing of A Types available on translucent yellow/green and opaque orange a/side-b/side mix (limited to 400) and translucent red with opaque orange center color in color (limited to 100: box set only), and a first pressing, double LP of Magnetic North on opaque orange with opaque purple heavy splatter (limited to 400) and opaque purple with orange center color in color (limited to 100: box set only). Magnetic North will also feature two previously unreleased bonus tracks ("Saskatchewan" and "The Unnamed Demo"), that will also be given away as instant downloads with all orders. Vinyl is expected to ship in early 2017. "We are super grateful to Graphic Nature/Equal Vision Records for giving us an opportunity to make some music," states guitarist Josh Brigham. "We've always been EVR fans, they signed a lot of bands that were huge influences on us. In addition to that, a lot of our friends in bands who have worked with EVR had nothing but high praise for them, so their reputation as being quality people made it a pretty easy decision." "The motivation for making this new album comes from a genuine desire to remain creative by continuing to write and play music together again," he shares. "We won't lie, between having jobs, relationships, kids, and other responsibilities, it can be tough to make time to play, but as long as we feel like we still have something good to offer, we will find a balance." Hopesfall is comprised of Jay Forrest (vocals), Josh Brigham (guitar), Dustin Nadler (guitar), Chad Waldrup (bass) and Adam Morgan (drums).