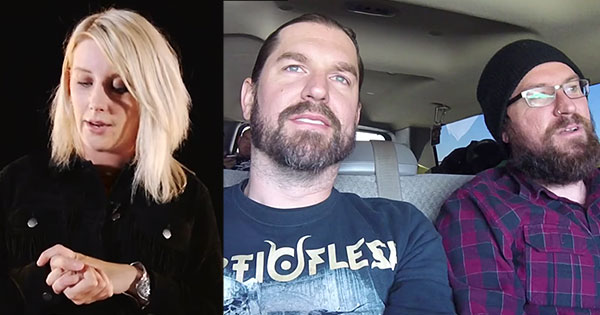 Mish Barber-Way, singer of Canadian punk rock act White Lung, has written an open letter in which she excoriates Colorado death metal band Allegaeon for attempting to finance their band (i.e. $51,000 per member, per year) via a newly launched Patreon campaign. Published by CLRVYNT, Barber-Way launches her polemic by calling Allegaeon "pussies" before titling them "the laziest, most pathetic, sub-human beta males in America." Here is excerpt of Barber-Way's piece:
"Your begging video was a complete joke. As I listened to your 'TM' [tour manager] spout off all the money you owed (over $8,700), I was shaking my head. If you were a small business, you would fold. I listened to your tour expenses, and you guys are such morons. You are paying people you don't even need. First off, management. If your manager was doing his job, you wouldn't be in this position. Fire him. Two, a driver? Can none of you drive? Stop ruining his life and let him go after a lucrative career – unlike you lazy shit brains. Don't fire your agent. He is your only hope. Have none of you any business skills? Stop hiring people to do jobs you are capable of. Cut the expenses, except essentials like gas, shelter and water. Do you pay taxes or collect? Do you even file? "What makes you think you are entitled to our money and pity? Why should I spend my hard earned money to help you when your misfortune is by choice, not chance? I'm seriously asking." ... "I have to go. I caught a 7am flight to Minneapolis to transfer to Iowa City to play a festival, then fly back to Austin, Texas for another. I leave that night and land in my home of LA that morning to and go straight back to my job as an account executive. I've got shit to do and it doesn't include begging my "fans" for money. Don't try to even fake that sitting in a van all day is hard. Day time on tour is a fucking nap."
You can read the whole thing here if you're interested.