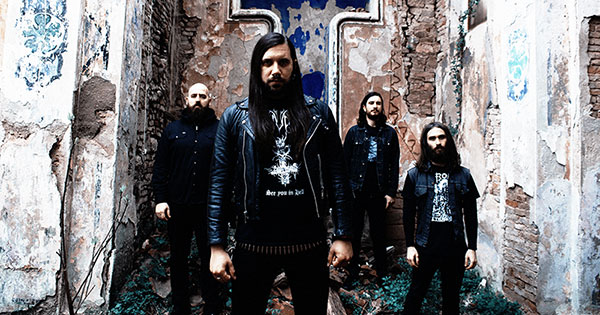 photo by Matteo Bosonetto
Italian "deathpunk" act Hierophant has officially revealed plans to release their fourth full-length this fall. The record has been titled Mass Grave and will hit streets on November 4 through Season of Mist. Tracked earlier this year at The Pit Recording Studio by Taylor Young (Xibalba, Twitching Tongues), Mass Grave was subsequently mastered by Brad Boatright (Ringworm, Magrudergrind) and features artwork courtesy of Paolo Girardi (Inquisition). In the words of Season of Mist, the record is "a dark and violent exercise in total extremity at the crossroads where hardcore, grindcore and death metal collide." Today we're exclusively premiering the album's title track. According to drummer Ben Tellarini, "This song expresses the path we took in the best way. It represents a new chapter for the band since we changed the line up. The world is falling apart day by day and we're all part of this enormous and disgusting mass grave." You can find a stream of "Mass Grave" along with its track listing below. Mass Grave track list: 01. Hymn of Perdition 02 Execution of Mankind 03 Forever Crucified 04. Mass Grave 05. Crematorium 06. In Decay 07. Sentenced to Death 08. Hierophant 09. Trauma 10. Eternal Void