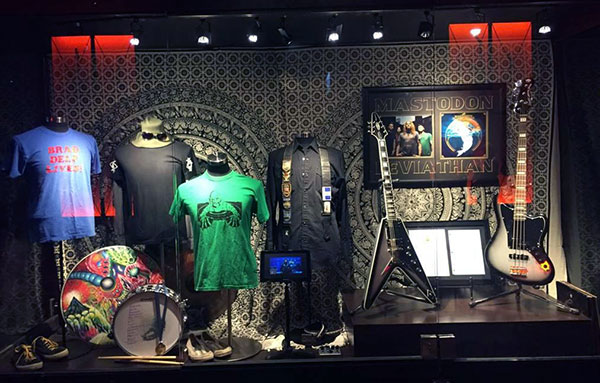 Official press release: Mastodon are now part of the elite collection of rock memorabilia featured at the Hard Rock Hotel in Las Vegas, NV. Mastodon has expressed their inclusion in the new exhibit as follows: "Joining the ranks of some of the biggest and most influential names in rock and roll, we are honored to now be a part of rock and roll history at the Hard Rock Cafe, in Las Vegas. Mastodon's showcase features artifacts from the past, including guitars, drums, set lists, handwritten lyrics, and clothes all used by the band on the long road to the present form over the past 16 years we have been together performing." Beau Dobney, Curator and Design Specialist for Hard Rock Hotel, added: "We are very excited to work with Mastodon, they are elemental in today's metal sound, and aesthetic. The exhibit will be up, here in the Hard Rock Hotel until summer of 2018."