Suicide Silence and Whitechapel have announced plans to co-headline a "massive" tour of North America this fall dubbed the "Straight Outta Hell Tour." The trek will feature support from Despised Icon (on select dates), Carnifex, and Oceano. The tour will commence in late September and run through October, though dates and venues have yet to be revealed. Suicide Silence guitarist Mark Heylmun comments: "Finally after more than a decade this tour of tours is coming to a city near you! Lube up those ear holes because Suicide Silence and Whitechapel believe it or not have NEVER toured together in the United States. Time for Friday night, every night!! Bring your energy we'll bring ours and together we will make memories on BlackCraft's 'The Straight Out of Hell Tour' this Sept-Oct. We got Despised Icon on some nights and we have Carnifex and Oceano along for the ride as well. "We will be partnering with the Living The Dream Foundation on some VIP packages available if you wanna meet/hang pre show. A portion of those proceeds will be going to their very special charity! Consider yourself in the know. Oh, and how could we forget that we may or may not have something new to share on this tour, so go get your tix and let's throw it the fuck down!" 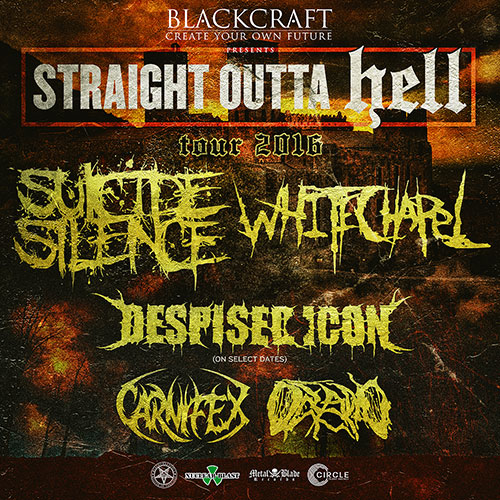