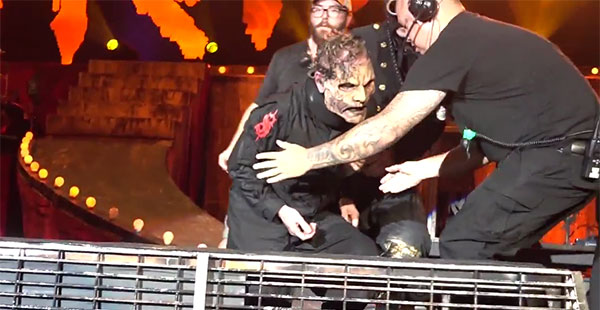 Slipknot frontman Corey Taylor, performing in a neck brace following surgery earlier this month, took a hard fall at the end of the band's set in Atlanta, Georgia on Wednesday night (June 29). Taylor remained on his back briefly before being helped up and ushered off stage. Video of the incident can be seen below. Fortunately, Taylor says he's ok:

ATL: haha don't worry, I'm okay! I THINK that fall was one for the ages haha! DAMN it hurt- but DAMN what a crowd! See you again soon!#CMFT

Earlier this month, Taylor was ordered by his doctor to avoid "headbanging" and jumping.

van flipped himself right off stage

What an old man.

take the damn masks off already

that's what happens when you try to Jumpdafckup at 42. old nu-metal dude is old.

A life alert necklace joke would be appropiate here

walls let me fall fck you all

Get that douche a throne!

that was not metal as fck. Awsome video quality tho. Like damn.

It's nice to see a video that isn't horizontally challenged.

DIE 3 TIMES, THEN HAVE A DRUG INDUCED COMA, FALL OFF A CHAIR WHEN HIGH ON PILLS WHEN OUT OF THE COMA, THEN LEARN TO WALK AGAIN AND THEN HAVE A G@Y HEART ATTACK, THEN COME TALK TO ME.......IN HELL. P*SSY. -PUTNAM, LIVE FROM HELL

Slipped on a garlic knot

Is he just gunna lay there and wait and bleed?

Every Time I Die break up
ex-War On Women guitarist Nancy Hornburg speaks out against band
Every Time I Die's Keith Buckley says he's been 'ostracized' from band and that brother 'lied'
Slipknot announce 'Knotfest Roadshow Tour 2022'
Ghost to perform on 'Jimmy Kimmel Live!' this week
more top news