Rotting Out accused of ripping off fans

Defunct Los Angeles, CA punk/hardcore outfit Rotting Out has apparently stoked the ire of some fans in recent months by not properly fulfilling merch orders. Of course, the March arrest of frontman Walter Delgado couldn't have helped matters, but Delgado has been free on bond since March 22 (he is still awaiting a preliminary hearing). Yesterday we received an email from a disgruntled fan stating that he ordered a hat two months ago. The item has yet to arrive and emails to the band haven't been acknowledged. According to the fan, "they don't seem to reply or give a shit." A quick cruise of the band's Facebook reveals that this isn't an isolated incident either: 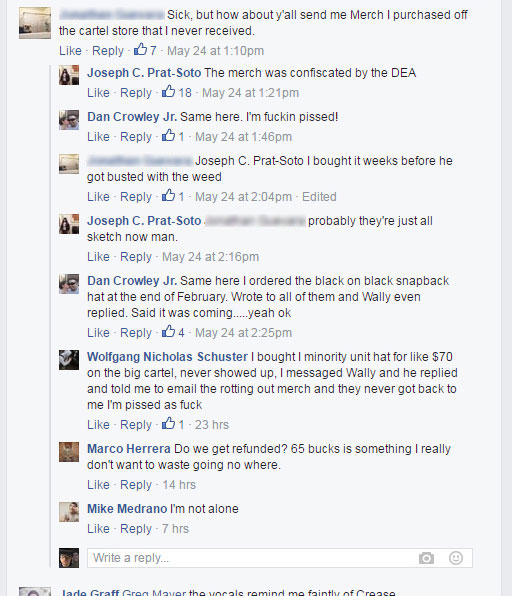 Hopefully there's an explanation for the missed orders and fans will be accommodated accordingly. UPDATE: We've received the following statement from the folks that run Rotting Out's merch store:
"Regarding the webstore shipping delay. I'd like to apologize for the lack of communication as issues beyond my control were being addressed. I would also like to take this opportunity to thank you all for your patience. I have made the necessary arrangements to proceed with shipping as of tomorrow (5/27). If you'd still like your order it will ship this weekend or if you would prefer a refund please request one today. - No one in Rotting Out has any control over the webstore. - None of the payments submitted have been accessed or withdrawn from PayPal. - No one is getting ripped off."