Arizona post-hardcore/metalcore band The Word Alive claim that their tour manager was jumped at a Florida show last night (March 16) by a local metal band. The alleged incident took place during a show at Vinyl Music Hall in Pensacola, and members of opening band Rainey's Revenge are at the center of the accusations. Here's what TWA frontman Telle Smith had to say via a series of Tweets:
"The band Raineys Revenge jumped out tour manager before we played tonight for citing their set due to them going over their time. Bullshit. They are lucky that they are cowards and waited until he was alone. Have fun being blacklisted from ANY beneficial show for life. Ignorant. All in all though we had an amazing show tonight Pensacola. We appreciate you singing your hearts out to songs new and old. We'll be back. "When your fanbase has your back it's an amazing feeling. Some of the Facebook comments you guys wrote on that band's page have me dying. Thank you. It will never pay to act unappreciative and unprofessional. Topping that off with unnecessary violence will end your career, good job."
For their part, Rainey's Revenge took to Facebook to defend themselves via two separate statements, both of which have since been deleted. You can check them out below. 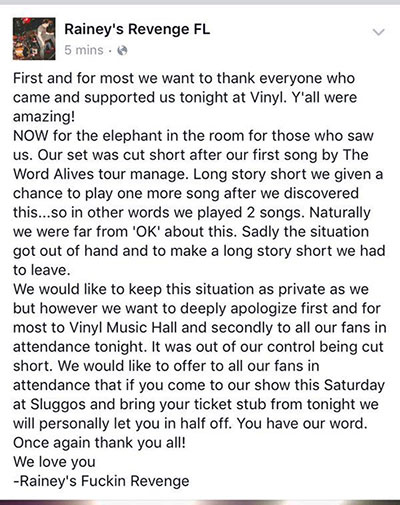 "RR set was cut short due to time issues. We set up fairly quickly but due to some sound issues unbeknownst to us apparently we went 10 min over. After our first song the TM told our vocalist that we had 5 minutes left, and before our guy could even get the word to the rest of the members he said dont try me I will cut the pa off! Needless to say we werent happy about it, but we played one more song and rushed off. "Afterwards two members were OUTSIDE of the venue smoking a cigarette and admittedly they were venting over what had happened. By THEMSELVES. The TM approached our band members getting loud and rowdy with our guys because he overheard the venting they were doing. The RR guys had went to where they were COMPLETELY alone and away from everyone to discuss the show. The TM approached them because he didnt like what he overheard. "After much yelling and finger pointing from both sides the TM punched our member in the face. They then proceeded to grapple with each other. Our other member grabbed the TM and everyone went to the ground. The security asked our member to let him up now that things had calmed. Our member did and the minute he was back up again the TM punched the other member in the face AGAIN and went after him. "The member who grabbed the TM breaking up the two fighting never even threw a punch and the member who was punched was merely defending himself. He was never JUMPED. Other people can claim they saw what happened but there were only 4 people there. Security, 2 RR guys, and the TM. "The TM came from inside the venue, the security was at the door and the RR guys were outside. We sincerely hope the venue has tape on it, because that will show the truth of what really happened."
Not surprisingly, love letters to Rainey's Revenge have been accumulating on their Facebook page. Here is a sampling: 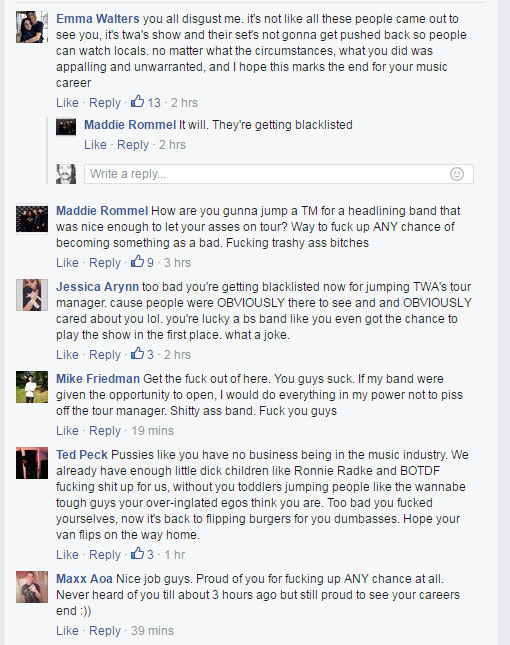