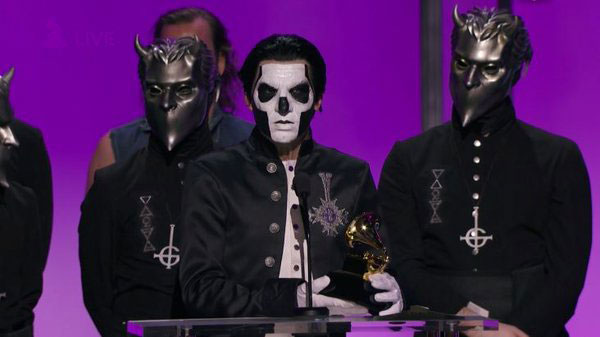 Winners are currently being announced for the 58th Grammy Awards, and Swedish rock band Ghost has officially won a Grammy in the 'Best Metal Performance' category for "Cirice," a track from their latest album Meliora. Ghost beat out fellow nominees August Burns Red, Lamb of God, Sevendust, and Slipknot for the award.

YO REAL TALK MY DlCK'S IN HER MOUTH RIGHT NOW STR8 UP FLAMES I REALLY DO HAVE THE LIFE OF RILEY!

I spend all my life on this website, and I have never heard of them, so why is this of interest to us

^^ you could be a comedian because that is hilarious

Life of Pablo is out!!

This is a disgrace

I see they took the corroded syphylitic dicks of blue oyster cult out of their mouth long enough to make an acceptance speech for their bullshit poser music. Hacks.

Okay guys, it is Mike from Breech here. Listen to our smash hit Lodi...which should have been nominated for best metal performance but we were overlooked because the metal community is afraid of guys like us...we are the Band of Bros!!! And nobody AND I MEAN NOBODY, can bring us down. #hornsup #futuregrammyawardwinners #slimfast

Grammy nominated August Burns Red.... never thought I would see that. Congrats. For what it's worth.

wouldnt "KISS wannabes" be more accurate? I guess its not hard to win when the other bands in the category are terrible.

kinda cool...at least it wasn't the usual grammy lineup of Slayer, Megadeth, LOG, Ozzy like just about every other year

yea, this band is pretty much horrible, but then again, most things at the grammys are. LIke, who decides this shit?

Posters here are even stupider than Grammy voters. Slipknot wannabees? Please, music is totally different. & maybe those that have never heard of them might be interested in trying them out, rather than dismissing them??

Was there a djent grammy nod?

I think it's pretty sweet that a bunch of hardcore satanists got an award in a crowd of white bread pop stars and cornball sageas.

What happened to Lambgoat? People used to know what the fck was going on around here. Now they think Ghost are Slipknot wanna be's and that fcking Sevendust should have won the Grammy? Christ on a crutch...

this band has nothing to do with hardcore but damn they are really good. that's right effective 2/15/2016 Glamboat goes...EEEAAAAASY LISTENINGGG??!?

this band has nothing to do with hardcore but damn they are really good. ^^ pees in his own mouth for fun

This band needs to skate into an AIDS tree already. One massively overrated pleasure session this band is. I guess thats how they won. I was really hoping Breech would take it instead. #ultraslimfast

not metal they are terrible band I dont care if you like them you wouldnt call a fork a spoon, so dont call a rock band metal

Ghost....the best of the worst. Kind of like Hitler being the best dictator.

Score one for Team Satan.