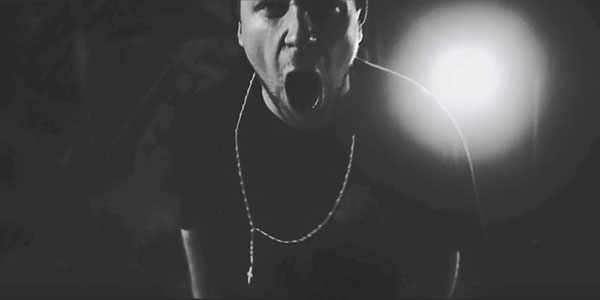 California hardcore band These Streets has signed with LHHC Records, an imprint of Fast Break! Records, and the label founded by members of Lionheart. The band's new album, Out Of Time, will be released on March 24. To coincide with the announcement, These Streets are premiering a new song titled "Membership Declined." You can stream the track below. Here's what vocalist Cam Grabowski has to say about it:
"Today in hardcore I see a lot of segregation and bullying. If you don't collect the right records, listen to the right bands, have the coolest friends, or play the coolest music you get ostracized and left out. We've always been about doing our own thing and going against the grain. We had no interest in joining the cool kid club so We've created our own place for kids to enjoy themselves and have a good time no matter who they are or how they look. This song's for the real ones. We don't care if you like hype bands, we don't care if you like beat down, we don't care if you listen to metalcore either. This song is about doing your own thing and not listening to the people that try to bring you down for not being like them."

^ Not a good comment. Scott is chill. Try harder Lol

These streets sucking off Lionheart. No respect for both shitty genericore bands. Lets go to a show give them the Dimebag treatment

these streets doesnt sound anything like lionheart. sit the fck down.

this is 1 of the worst things i've ever heard

When is that guy gonna quit lionheart and actually gonna do something with this.

Members only association does not aprove this message

We earned this through hard work. -not one member from these streets

cant wait to see them with cdc in march

Lol scotty plagues is a bitch. So many people are waiting for a reason to beat that dudes ass. Suck my dck

the pervasive use of the word "kids" in that statement is very appropriate. "Ya, i just wanna take this opportunity to talk about the very serious problem of ragging on kids because of what music they like in the hardcore scene this is a srs problem guyz forreal" grow the fck up what is this middle school?

THESE STREETS ARE COLD MOTHA fckA

They must've been bumpin slipknot when they wrote this turd

Actual dumbass is stoked. When that dude shits i wonder if he wipes his chin too haha

These god damn wiggers are at it again?

Heshr here, you guys need someone to sell merch?

Every member of this band sucks besides Cameron. Biggest gays ever.

MARTY RUGER HERE YOU KNOW HOW I ROCK

Lets take a poll. Who got with mel and her stankpus as matty was at work?

So I'm assuming this song is dedicated to Jaffy and Elliot. Memberz only

Wow. These Streets put Lionhearts dck further down there throat? Is this even really news?

Come to indonesia. Me & my homie azamat want to mosh. Couple of pimps no hoes

Cameron must suck a really good dck. Taking loads to the face and tonsils to get signed

Scott sparks here...I broke edge because this band sucks....you have to be on drugs to listen to this sht

The wiggles "Fruit Salad" goes harder than this. Better breakdowns too

Remember when bands actually had something to say? Seems now it's just kids from suburbia trying to convince people they grew up hard.

"Today in hardcore I see a lot of segregation and bullying. If you don't collect the right records, listen to the right bands, have the coolest friends, or play the coolest music you get ostracized and left out." UNLESS YOU ARE IN LINDAMAR, THEN I WILL MAKE FUN OF YOU AND YOUR BAND.... -CAM

so cal kids are stoked to get their ass beat over more comments.

Ricky Trigga is dying because of this song

These comments make me laugh. Dudes in lionheart and these streets are nothing but nice dudes. Showed me nothing but love. fck all these herbs.

Whatever gay is talking about The Coach needs to kill themseleves

i wonder why LH always touring Europe? ...oh yeah because no one state side gives a fck or shows up to any of LH shows

these streets is cool in my book their bass player is dating a blonde dude with glasses. if thats not hardcore moving towards progress and accepting people from all back rounds i don't know what is

why does every "big announcement" from these fck boyz have to do with lion heart? we get it your dad plays in lion heart

lamboat comments all fun and games till u get stomped out

oakland raiders here! anyone have a place for us to stay?

Everyone in cruel hand is lol'ing

"We are so accepting of people in the scene, but fck pinup and Linda mar, SK and c-ckwise all day gay"

Euro's and David Pierce is stoked

David Peirce here... I do not fck with this SK shit

Josh's lady is hella hot i heard she does rear too

OG Actual Dumbass might talk shit to you, come to your hood, and ger beat up while his homies watch.

What the fck is a Linda Mar

mark mastiff here.... anyone seen nate raider??? he was supposed to be at the squad meeting two months ago but he's hiding from the feds..... hmu at the next show if u seen him. thanx.

lucas 0h3dueceduece back again... if anyone wanna see accuser play tonight we playing a secret underground basement backyard show with an indoor pool and beer and we got our indie shoegaze sideshow project comin thru with robert and the choppy boiz.. so hmu and byob

Pinup Here, I Recently Started A GoFundMe Because Clockwise And SK Took All The Big Packages. If You Want To Help Out Check Out The Twitter

^Wow. Your name should be the troll. How sad that you're so jealous.

Cam and Josh.....you dudes know your ladies cheat on you...right? Well now you do

Actual dumbass here. My band sucks and I wish we was as good as these streets. Plz let me join c-ckwise will make it worth your while c-ck in mouth

These streets new drummer here until they kick me out for stealing money. Listen to recognize bitch

Trolls here! I get on Lambgoat and anonymously post shit I would never say to the bands I go out and pay money to see all the time.

These streets sucks that's why they weren't invited to play standing hard fest. The 67 people in attendance were not bummed at all.

Mr Steal Your Girl aka Daddy Long dck here....fck all y'all. THESE STREETS BITCH!

I was inside of Travis' ex. Well, werent we all at some point

Keep child predators out of clockwise. Lets start with manuel

If this is the new generation of hardcore then I am out.

Remember when Josh from these streets socked up actual dumbass and he begged josh to stop? Keep talkin pssy. People don't forget

Cameron must really like taking those c-m shotz from Rob's dck cant do anything without Lion heart's help pathetic...

we hear all you haters talking but what are you doing to give back to your scene? where's the facts? where's YOUR bands and YOUR music, YOUR scene that YOU built? get real. membership cards being handed out @ skylmt 3/5/16 if you lambgoat keyboard warriors wanna join

Fronz is NOT stoked straight Attila rip off band. garbage.

Someone help the american dream find a drummer or else they dont get to play warped tour this year!

The brocore scene is stoked

I think it's funny that these fools think people are hating on their "success" these fools got what they have off the back of lion heart. Look back at everything they've done. None of which they got on their own. These fools are posers. And yeah Josh's girl does look looks a dude but she can still suck my dck anytime

Not a bad song circle pit part feels like it was forced though. Definitely a progression in the right direction for these dudes.

Who's dck you suckin

I wonder what was going through the head of the engineer who recorded this while listening to these lyrics.

Cam has a fat sister...we should fck her like his bands fcks us outta good tunes

Clockwise/SK are a bunch of losers. Just because you can jump people and play breakdowns doesn't make you hard or cool. You do nothing for hardcore when you beat people up and rep some Weeny gang.

hope they tour, their van flips, end of story

"we don't care if you like beatdown but we don't care if you like metalcore either" This type of statements are the most condescending and holier-than-thou statements that shine light on the sort of judgmental jerks they actually are. What a bunch of fcking righteous pricks. They're probably laughing about all the kids in metalcore shirts that were at their shitty 16-people shows.

As a victim of bullying for not collecting the right records, this hits home for me

This is the worst garbage to ever enter my body... and I frequent the homosexual crack dens in THESE STREETS.