Belgian death metal veterans Aborted will release their ninth studio album this spring. Titled Retrogore, the twelve-track album features artwork from Christopher Lovell (have a look below) and will hit streets in April through Century Media Records. Here's the pitch from Century Media:
After delivering two seriously drenched and critically acclaimed albums in the form of Global Flatline (2012) and The Necrotic Manifesto (2014), Aborted have returned to not only deliver another album jam-packed with ferociously ripping brutal death metal but also surpass all expectations with what could be considered their most mature and diverse album to date. Don't fear though, the berserker drums of Ken, the virtuoso guitar skills of Mendel and his new partner Ian, JB's jackhammer bass as well as the possessed growls, shrieks and squeals of commander-in-chief Caluwé are all still prevalent, but this time, Aborted have added a good portion of epically-crushing atmosphere throughout the twelve tracks found within Retrogore. Who dares wins! A first glimpse into the new material will be launched soon, so stay tuned! 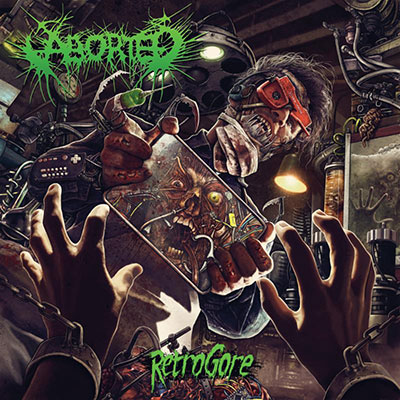