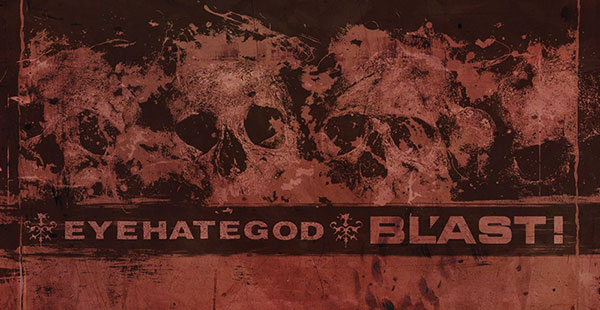 Official press release: Influential Santa Cruz, California hardcore band Bl'ast! and New Orleans, LA sludge metal masters Eyehategod have just dropped a new, two-song 7" split via Rise Records. The 7" is available in 3 vinyl variants, limited to 1000 pieces, the limited to 100 version includes a t-shirt. Purchase at Riserecordsstore.com. The two songs are also available digitally and is streaming on all digital service providers. Mike IX Williams (Eyehategod):
"I first saw Bl'ast! back in the 80's at an obscure club in New Orleans after deeming Power of Expression and It's in My Blood two of my favorite albums ever to be made. Me and my friends I was there with (one of which was CoC's Pepper Keenan) were blown away and viciously soaked in the hardcore punk skate vibe even down here in the American South. Cut to years later, I met the guys in Bl'ast! again when Eyehategod did a US tour with Corrosion and have since remained friends all these years. I am honored to share this split record with Santa Cruz's finest and the fact that both of our bands still exist and are still rocking in this black void in time is a testament unto itself."
Clifford Dinsmore (Bl'ast!):
"It seems like yesterday, that I went to Slim's in San Francisco to hang out with C.O.C , and met/witnessed Eyehategod for the first time...a relationship that turned out to last for decades. The first shirt they gave me was the one with the dude launching off the building. To this day, still one of my all time favorite bands. I hope to God this release gives us all a cheap excuse to play some more KIller shows together. Another thing to note is the fact that "Cut Your Teeth" is the first song we wrote together as the current B'last! line-up, of Mike, Joey, Nick and I."