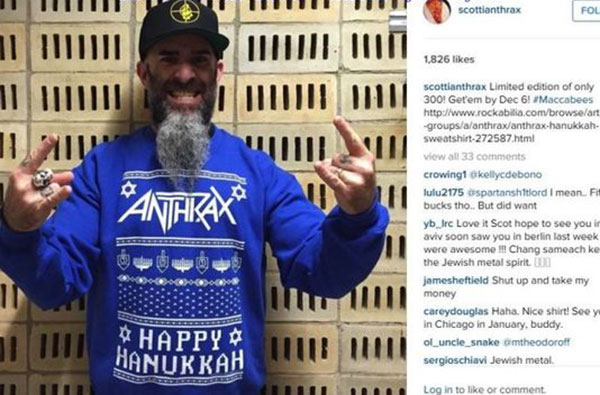 According to a report from Detroit Free Press, metal veterans Anthrax are being sued by a Detroit artist over the use of his design on the band's Hannukkah sweater. Artist and businessman Aaron Cummins says he created the original design for the "Ugly Hanukkah Sweater" in 2012 and has exclusive rights to its use. Cummins claims that the design was registered with the U.S. Copyright Office in 2013 and has been sold through his Detroit business, Wet House. Regardless, last fall Anthrax began selling a sweatshirt featuring the same design, albeit adorned with an Anthrax logo. Cummins has filed a copyright infringement lawsuit in U.S. District Court and is suing Anthrax and other parties for roughly $1 million in damages. Among those also named in the lawsuit are ecommerce website Rockabilia, where the sweatshirt has been for sale, and Global Merchandising Services, the merchandiser who supplied the apparel to said website. You can find more information on the matter here. 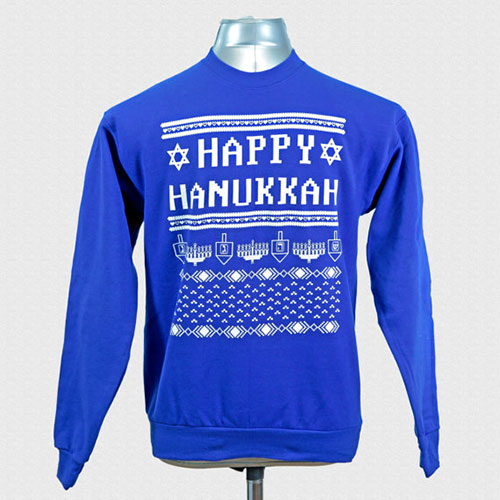 Does anyone actually listen to anthrax

HE SEEMS DISRESPECTFUL. LIVING WITH THEM AND THEY THERE KIDS AND ITS GETTING ON HIS NERVES HE CALLED ME A BlTCH WTAF

I hope the judge makes a decision and ends with "I AM THE LAW!"

Better see Anthrax now before they are bankrupt.

I'm forwarding this story to a few screen writer friends... this is a Hollywood move waiting to happen.

Throw the Jew down the well :spin kicks: so my country can be free :Moshes:

Donald trumps white power super pac should be on this

I got some keez on tha keez not sum skweez on tha skweez ya heer meh mane. #trump2016

If they are truly sorry they should make a donation to Simon Wiesenthal.

To prove he's truly sorry Scott Ian better make a sizeable donation to the Simon Weisenthal foundation And kill himself, of coooourse.

Scott Ian Rosenfeld..... I wonder why he remains famous after all these years.. His music is shit.. Wouldn't have anything to do with him being a useless jew would it?

Jews being filthy greedy vermin and suing each other is not news.

I don't know who's Jewing who anymore,

I pray this puts an end to this ugly ass cheaply made band Christmas sweater trend. I'm looking at you generic metalcore bands.

Who the fck would wear this? God what a stupid idea. Ugly christmas sweaters? OMG TOTES HILARIUS AND METAL HAHAH! bands that do this are gigantic tools

BREAKING: Anthrax dropped from Fest BREAKING: Anthrax show in New Orleans cancelled BREAKING: Scott Ian tells Anthrax to move on without him BREAKING: Fading has-been musicians speak out against Anthrax in order to garner some spotlight for themselves

308 is Billy Milano or trying too hard to be.

ohhh well let me just throw on my Jew helmet, squeeze down into the Jew cannon, AND FIRE OFF INTO JEW LAND! WHERE JEWS GROW ON JEWBIES!

^^ you could be a comedian, because that is hilarious

you absolutely cannot trust a jew

is the artist 10? 'I want a million dollars' - limited to 300, have fun with the lawsuit moron. Send a cease and desist and shut the fck up and do some work

thats what happens when you design something that looks like fckin clipart. people just assume that shit is public domain.

and here come the keyboard Nazi's

David Pierce from Corrupted Youth Crew here. If anyone has a problem with CYC or Corrupted Booking call me 9513700291