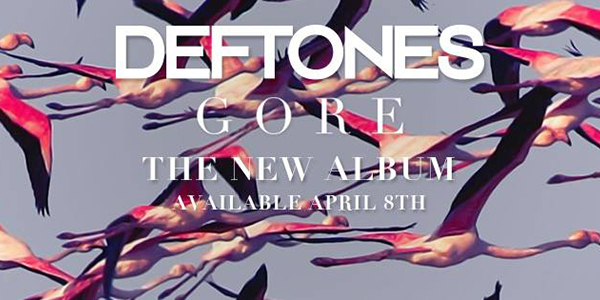 Official press release: Multiplatinum, Grammy Award-winning rock band Deftones have announced that they will release their eagerly awaited eighth studio album, entitled Gore, on April 8th via Warner Bros. Records. Gore is available for pre-order beginning today at www.deftones.com. Those who pre-order will receive an instant download of the first single, "Prayers/Triangles." The album was produced by Matt Hyde and Deftones. Says Deftones singer Chino Moreno of the album: "Out of respect for Pac, Big, Stevie, Michael, Hendrix, Gore is ONE of the greatest albums not the greatest, just one of." In addition, the Deftones music store will be offering an exclusive and limited edition, 180 gram, double LP vinyl version of Gore. This will be limited to 3,500 foil-stamped and numbered gatefold jackets and is available for pre-order. Deftones will hit the road in the spring, starting with a March 5th headline performance night two at Travis Barker's Musink Festival - a three-day tattoo convention, car show, and concert, followed by appearances at this year's SXSW music festival. May and June will find Deftones appearing at major festivals in the U.S. and Europe, including Carolina Rebellion, Rock on the Range, Rock AM Ring, Rock IM Park, and Download, among others as well as a solo-headline play at Wembley Arena. Deftones have released seven albums to date and have sold over 10 million albums worldwide. Deftones is vocalist/guitarist Chino Moreno, guitarist Stephen Carpenter, keyboardist/samplist Frank Delgado, drummer Abe Cunningham and bassist Sergio Vega. The track-listing for Gore is as follows: 01. Prayers/Triangles 02. Acid Hologram 03. Doomed User 04. Geometric Headdress 05. Hearts and Wires 06. Pittura Infamante 07. Xenon 08. (L)MIRL 09. Gore 10. Phantom Bride 11. Rubicon

Most overrated band of all time

Spoiler alert: It sounds like all their other albums.

their safety and whereabouts is the most important issue here. Has anyone been able to determine this?

djent and house fans are stocked

*Stoked. Yes I stock for a living.

That was one of those events that showed how fcked this world is. People freaking out over the whereabouts of some overhyped numetal band while innocent people are held hostage in a concert venue being killed one by one from terrorists . That was one of the biggest facepalm moments in recorded history

Al Gore is drawing up litigation papers as we speak

anonymous5 hours ago Most overrated band of all time

Anyone catch the tour where Deftones opened for CIV?

The majority of the time spent on this album included coming up with obscure song titles.

Band is good. Suck your mum

Say what you want, but Deftones aren't numetal. No one sounds like them, and go fck yourself. Can't wait for Gore.

Listen. Just because they arent death metal doesnt devalue them. They have been putting out great music for a long ass time. They tour often, are respected by many noteable metal bands, and unlike tool who charged 140 bucks so u can blow your load on maynard and beg him to make an album every 10 years, deftones records every 3 years and u can see them for like 40 bucks.

Badass bands that got mislabeled numetal and albums you need you give a chance: Mudvayne - LD 50 Slipknot - Iowa Nothingface - An Audio Guide to Every Day Atrocity In no particular order

Best album ever? Who is he kidding. I just heard the first song off this and it's not very good. Probably won't even be in THEIR top 3, let alone best album ever lol.