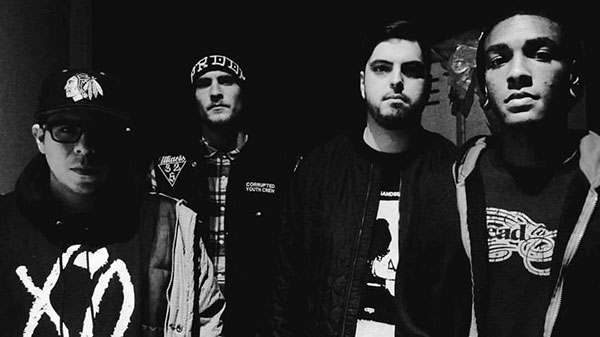 Chicago beatdown band Drowning has inked a deal with the eastern PA hardcore label Fast Break! Records. The group will release their debut full-length album Egotrip on February 26, but you can stream the first single "Lord of War" now below. The track features rapper (and fellow south side Chicago native) MoeCyrus. "'Lord Of War' was written about the real life situation of trying to better yourself while having to handle your business," says vocalist Bryan Gantz. "Everyone has history and sometimes you are where you come from and rep what you rep. Growing up in Chicago you learn a lot from the streets. Once you commit to a lifestyle there is no going back or backing down. You have to stand up for what you believe in through and through. When the 'Lord Of War' calls he calls with no question." The theme of guest vocalists continues throughout the album with contributions from Matt Honeycutt (Kublai Khan), John Hoffman (Weekend Nachos), Rob Watson (Lionheart) and Baer Coon the Ewokk. "This is without a doubt the realest album we could have put together," says bassist Ryan Kramarz. "We went into the project with open minds and created something that encapsulates each member, our city, and the current state of things. This is Chicago Beatdown. This is Drowning." You can pre-order Egotrip here.