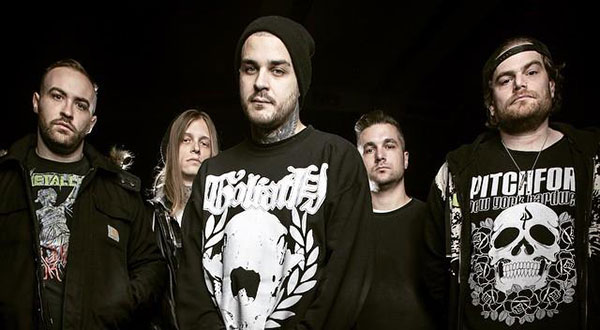 Lambgoat can exclusively report that Emmure members Mark Davis (bass), Jesse Ketive (lead guitar), Mike Mulholland (rhythm guitar), and Adam Pierce (drums) have all left the band. The four will resurface in a new project next year. Davis provided Lambgoat with the following statement:
"As some of you may or may not have heard, Jesse, Mikael, Adam, and myself are no longer in Emmure. We have decided collectively to pursue other endeavors. We would like to thank the Emmure fans for all the support and love over the years, and to everyone who has help the band on its way, you are all greatly appreciated. Be on the lookout for a new project from the four of us in 2016."
Regardless of the departures, be aware that Emmure is still an entity. Of course, its only official member at the moment is vocalist Frankie Palmeri, however, a new album is expected in 2016. UPDATE: After making contact with Mark Davis to confirm our original report, Alternative Press got additional details from Davis regarding their exit and forthcoming project. Here's what he had to say:
"The four of us made the decision to leave the band pretty much immediately after finishing our set on September 9 in Russia. It was our first string of shows back (Ghostfest in Leeds, and two headlining shows in Russia) since taking most of spring and all of summer off to allow Frankie's vocal cords to heal, which he injured during the Stronger Than Faith Tour. We all expected to come back to a refreshed, productive and positive work environment, but that was not the case. "We had no plans to 'dismantle' prior to actually doing it. We did, however, have plans for a new album and new label. After Russia, we were supposed to go to Japan for shows, and then come back home and get to work. Since then, we've just been waiting for the announcement to happen so that we can move on with our lives and our careers in music. "Currently working on material for an un-named/un-fronted project. It is in the early stages but progressing quickly, and we will be ready to find a singer to fit the sound of the band soon. And as far as the sound goes, it's still going to be us playing our instruments the way that we love to, but in a new, refreshed environment. "The most important thing I have to say about all this is that there is no time or room for negativity in life. If someone is bringing you down or holding you back from your full potential, it's time to cut them out, no matter how much you may love them."